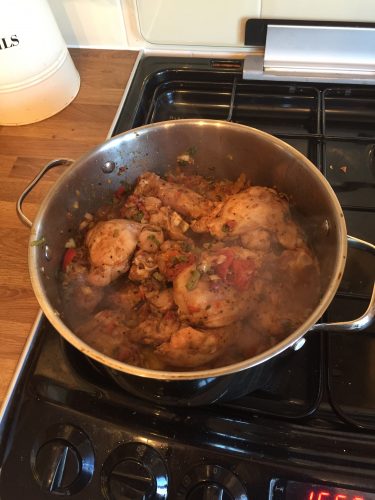 Sipping a cup of hot tea just before it was cool enough to drink was about as daring as it got these days for Leslie. Les, to his friends.

His friends around the table would be very impressed. They would smile and nod to each to other as if to say, “You wouldn’t catch me doing that.”

Yes, Les was the leader of the squad when it came to tea temperature. A fact made remarkable given that, due to an infection of the throat, tongue and gums, contracted in a Vietnamese jungle, Les had no capacity for sensing temperature at all.

The doctors had called his infection Gumbo. The proper name for it was chronic pharyngitis but, seeing as these doctors had only had a week of training with the St John Ambulance, it was the best they could come up with. The treatment they devised was to put the Gumbo sufferer’s arm in a sling made from the jumper of the sufferer and a large safety pin. It was an entirely ineffective treatment but it was the best they could do with the training they had received from the St John Ambulance.

Les’s squad all contracted Gumbo on the same night in that Vietnamese jungle. The doctors barely had enough safety pins to cope. It was thought at the time the cause of the Gumbo outbreak was the stew the chef had made. It was a new recipe Chef hadn’t tried before called Gumbo stew. As most people know, the main ingredient in Gumbo stew is a small river fish that looks a bit like it’s been stepped on. Chef hadn’t had time to go in search of this small river fish so he just chucked in any old ingredient he could find lying around. Like moss. And a frog. The stew was revolting but the squad ate every last drop so as not to offend Chef. It doesn’t do to offend a chef or you risk them spitting in your food. Everyone knows that.

This squad was made up of Chef, two members of the St John Ambulance, a guide named Kim, Les and the rest of the sales team. Les had heard there was a war going on in Vietnam. It was a war between the United States of America and the Vietnamese. Each side was furious with the other because of something called Communism. Les could see both sides of the argument for Communism, but Kim was dead against it. Chef, was pro Communism but only because Kim was dead against it. Don’t even go there. Les had gathered this squad in order to take advantage of a business opportunity he had spotted. From doing a bit of reading, Les discovered that, in ‘Nam, there was heroin.

Now, lots of the squads in Nam at the time were made up of something called ‘The American Army’. Les had put his squad together by telling everyone in the Holloway Road pub he was in to “Follow me!” A quick stop at the St John Ambulance HQ and then an airport saw Les’s squad touch down in Nam. But before heading off into the jungle to look for heroin, they needed a chef. They found Chef playing dice with some old Vietnamese men. Chef, and the Vietnamese men were sat in a circle around a large scorpion. The rules were very simple. If you threw an odd number you had to hold the scorpion in your mouth for three seconds. If you threw an even number you had to put the scorpion in your pants (UK) for five seconds. By the time it came to Chef’s turn a large quantity of the players had died of deadly scorpion stings. When Les kindly enquired if any of them were a chef, as they needed one for a trip into the jungle, Chef was quick to volunteer.

The guide, Kim, was harder to come by. No one seemed to want to join a vigilante squad of cockneys looking to score a shit-ton of heroin. Except Kim. Kim was a Vietnamese soldier looking to defect as long as he could get properly rich. Kim knew about heroin, you bet he did. He knew so much about heroin the lads started calling him Kim-Kim-Heroin. He didn’t like it. But he did like heroin. The sales team was made up of the gang that had followed Les out of the pub. There was Martin, Pat, Iris, Ian, Bill and Tommy. It was their job to shift the gear once back on Holloway Road. They reckoned they could shift it no problem.

On the first day in the jungle, Kim led the squad to one of the biggest opium producing areas in the whole of Nam. Hiding in the undergrowth, Kim had seen a warehouse, through a clearing, that looked extremely heroiny. Les sent Tommy, one of the sales team, in to have a look. Tommy stepped nervously into the clearing. He was hunched and tense. He looked left and right. Seeing nothing he breathed a sigh of relief stood up straight, took three steps forward, then fell over and didn’t get up. Tommy had been shot cleanly through the head by an American bullet. Other people were dead set on this heroin too, thought Les. Les declared the mission a success and asked Kim to lead them to a similar but different shit-ton of heroin.

Four nights later, bellies and trouser-legs full of Gumbo stew, Les’s squad found just what they were looking for. An absolute shit-ton of heroin.

The heroin was stacked floor to ceiling in brown, brick-sized packages. Being nearly dinner time, the guards were beginning to gather around a rather delicious smelling stew. Les saw the opportunity. He turned to Chef and said one word: “Gumbo”. Chef nodded and drifted off into the darkness of the Vietnamese jungle. Moments later, one of the guards, who had been going through some post from back home, burst into uncontrollable laughter. He was laughing at a picture his wife had sent him. It was of a cat with a speech bubble. Inside the speech bubble were the words, ‘I think you’re purrfect’. When he showed the rest of the guards they too burst into hysterical laughter. A talking cat! That was when Chef took his chance. Two luminous white butt-cheeks hovered out of the jungle and released a monumental shit into their stew. Hey presto, Gumbo stew.

An hour later, the guards were lying prostrate on the floor outside the heroin shed. They could only groan and clutch their stomachs as Les’s squad swept in and out of the shed, taking everything with them, like a ninja hurricane. After a night’s trek with heavy sacks of heroin, the squad emerged into a jungle landing strip. Good on you Kim! One-by-one the squad swung their sacks into a waiting plane with the help of its crew. Suddenly, the pilot turned to Les and said, “You’re nicked.” Les, a little off guard said, “No, I’m Les.” Then the pilot put handcuffs on Les. DEA! At the same time the rest of the crew put handcuffs on the rest of Les’s squad. They were all nicked.

Holloway prison isn’t so bad once you get used to it. And after 40 years you really get used to it. Sure, it’s cramped, dirty, you get beaten up quite a lot and the screws are nasty pieces of work but generally it’s pretty good. That’s what Les thought. The food tasted far better than Gumbo stew, the uniforms were well pressed and you had some company while on the toilet. Les did have one criticism: the tea was a bit hot.

One Response to Gumbo Stew – A Short Story by Matt Comras