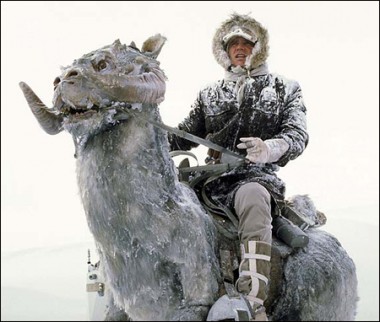 ‘Your adventure begins here!’ said Dennis to Toby, his 11-year-old son, as they ran through a packed Kings Cross Station.

Toby beamed and picked up his pace, though it was difficult to go any faster as his trolley was so leaden. He was pushing a large trunk, with a suitcase on top and large ornate bird cage on top of that, inside of which was a terrified-looking owl, which looked recently captured, rather than tame. Dennis, who was trolleyless, led them past platform 9 and waved for Toby to ‘come on!’ A call came through on Dennis’ phone just as a station announcement came over the tannoy.

Toby came running round the corner to find his dad stood before one of the large brick pillars that separated platforms 9 and 10. Toby came to a stop and Dennis sank to a squat to be eye-level with his son.

‘Just like we practised, son. This is the place. I want you to run at the pillar as fast as you can.’ He ruffled Toby’s hair and kissed his forehead, upon which there was a drawn a small bolt of lightning in red biro. Toby took a deep breath, then pushed off. He charged at the pillar with all the speed he could muster, the wind rushing against his fringe. The owl was going mental.

Toby crashed painfully into the pillar and fell to the floor, profoundly winded. His luggage scattered right across the platform. The owl was making an awful racket. While some commuters merely walked past, stepping over Toby, others came to his aid.

‘It’s OK, Tobes’ shouted Dennis, running over and pulling him to his feet. ‘Let’s try again. But you have to really believe it this time!’.

Kyle got up from his table and strode across the large cruise ship dining hall to the elegant first class section. He approached the captain’s table, where there sat not only the captain and his first mate, but also the wealthy family they were hosting for dinner; they were all dressed in tuxedoes and gowns, and their jewels and accents seemed to be from a completely different world to Kyle.

There was a young, pretty lady at the table, sat beside a handsome man typing into his phone, and Kyle was transfixed by her. She was sipping from a champagne glass, held in aloft by slender fingers with polished nails that reflected the splintered light from the chandelier. On her third finger, which was raised slightly from the glass in the manner of rich people, there was a ring with a marble-sized diamond that not only reflected the chandelier’s light, but emitted its own white animation that played on the highly polished silverware. Kyle reached out a hand to her and everyone around the table watched.

‘I was wondering,’ said Kyle, ‘If you’d like to come to the lower deck with me? To the garage where everyone’s vehicles are parked. We could break into someone’s car and have sex in the back seat.’

Silence. The family stared at Kyle then looked at the girl to see if she knew this man. Her expression said clearly that she did not.

‘Excuse me!’ said the father, ‘ Please leave us…’ But Kyle interrupted.

‘Then we can go to a party with my poor friends in the lower decks and get wasted on cheap vodka, then maybe have sex again.’

‘Right, that’s it!’ The fiancé placed his iphone on the table, got to his feet, threw down his napkin. He was foot taller than Kyle and had wide shoulders.

‘And after that,’ said Kyle, hand still extended, palm upturned. ‘When the boat sinks, we can float together on a bit of wood for a while before I die. And then you can spend the rest your life loving me and not this arsehole.’

And with that the fiancé’s moistursied fist connected with Kyle’s unprotected cheek and Kyle fell backwards. Before the lights went out for him, the last thing he saw was the girl’s beautiful face looking at him, framed in auburn ringlets; a face that didn’t need special light or jewels or riches and was plainly open and true, and induced an all-encompassing heartache that was instantaneous and from which there was no recovery, ever.

The punch was nothing. He was knocked out by her looks.

Michael arrived home covered in blood and carrying the bloody corpse of the his family’s pet Labrador.

‘OH MY GOD!’ shrieked his wife when she lookout of the window and saw him struggling down the driveway, and she ran outside. ‘What happened? Are you okay? OH MY GOD!’

‘We were out walking and it started to snow.’

‘I think it was almost a blizzard.’

‘So I cut his stomach open and got inside to keep warm’.

‘There were no busses or anything. We were stranded.’

‘I know, It was tough. A real tight squeeze. But I curled up and stayed inside and waited it out until it stopped snowing. It’s lucky I’m pretty flexible. It’s probably the yoga.’

The kids came running out from the back garden. ‘Daddy!’ said Kate, ‘What happened to Alfie?’

‘He became a hero, honey. A damn hero.’ He laid the expired dog down on the lawn and looked at his wife, ‘What news of the imperial fleet?’

Michael removed a bit of what might have been dog intestine from his shoulder. ‘We must be prepared.’ he said. ‘Lord Vader is close. I can sense him.’ And he headed inside the house, pausing only to say, ‘I’m hungry. I’m going to make a tuna sandwich. Anyone want one?’