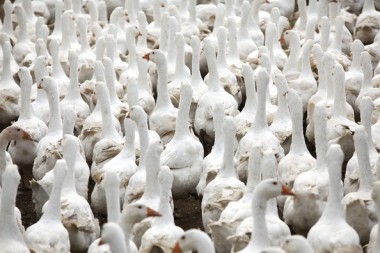 On the first day of Christmas my true love sent to me a partridge in a pear tree. I didn’t ask for it. It wasn’t on my list. And I have no room for it. Not that I’m ungrateful, but it just seemed overly extravagant, and maybe a bit weird. Still, the sheer effort involved in such a gift really is a testament to the power of his love for me. I felt really special.

On the second day of Christmas he sent to me two turtle doves and a partridge in a pear tree. I was still reeling over the first pear tree with a partridge in it, and then he sends another. Plus, two turtle doves? I know nothing about caring for birds, but now I have 4 of them in my flat. This is when I started to wonder about him.

On third of Christmas he sent me three French hens, two turtledoves and yet another partridge in a pear tree. More birds? I was like, what the hell is going on? I invited him over and we had a talk. He got pretty upset, which hurt me because he’s my true love. But he agreed that he had maybe gone too far, and he pledged to redeem himself.

His way of redeeming himself turned out to be by sending me more birds. The next day, the fourth day of Christmas, he sent me four calling birds, three more French hens, two more turtledoves and yet another fucking tree with a partridge in it. This is when I began to have serious doubts about our relationship.

The refuse collection people won’t take away whole trees, so I was chopping one to bits in my front yard when his next gift arrived. It was the fifth day of Christmas and he sent me five golden rings (why five? Beats me), plus all the stuff he’d already sent me before. I gave up chopping. It was useless. A new tree arrives each day. I was over run with hens and doves and they were shitting everywhere.

I called his parents to say that I was worried about his mental health, and that’s when I realised the root of the problem. His mother is a bonafide psychopath. ‘Isn’t he the most romantic man in the world?’ she said, and it was difficult to hear because of all the bird noise, from both my end and hers.

The phone call didn’t make a dent. At daybreak, six geese a laying arrived by mail, wrapped in red bows. When geese lay they make a terrible noise akin to what I’d expect a goose being brutally murdered to sound like. I probably don’t need to mention that he sent everything else all over again too, but I will, just to help you to imagine my personal hell during this period, and the pure devastation caused to my one bedroomed flat. I called him, but I got only an answer phone message that was personalised for me alone, which informed me that he couldn’t answer because he was out buying tools. A vault of alarm shot through my veins.

I woke the next morning to find seven swans a swimming at my front door. Not only had he sent the swans, apparently, for them to be the perfect gift, they had to be swimming, so he’d dug a pond in my front yard. Back-breaking work given that it’s solid concrete. Oh and guess what, he sent everything else again too. I called the police.

They came over and I told them the situation, but they were just like, ‘Hey nice swans. He built that pond? What a lovely festive gesture.’ And I was like, Oh my God, I’m completely alone with this problem.

I left him a desperate plea for respite on his voicemail, and then he figured that the only thing to do now was to up the ante and demonstrate the true power of his love.

The next morning, I’m knee deep in the pond wrestling a full-grown adult male swan, trying to get it to leave, when the next gift arrives. It was the eighth day of Christmas and eight maids a milking just walk into my flat. Eight more mouths to feed. Eight more people using my bathroom. And you know what they were milking? Cows. Each one brought their own cow, too.

They say that you need to work at a relationship, but when the guy starts actually sending you people as presents, you know that it’s definitely time to call it quits. They also say that love is blind. Well, in this case, love had made him blind to basic human rights protocol. I called Amnesty International.

So, the guys from Amnesty turn up in festive paper crowns and tinsel scarfs and get along famously with the maids. And the maids insist that they aren’t being made to do anything against their will, so there’s no problem. And I’m like, ‘Are you fucking kidding me? Look at the state of my place. There are 8 cows in my living room’. And the maids and the guys from Amnesty just start singing Christmas carols together. I make a deal with myself there and then that when my true love comes over the next morning, I will end the relationship.

I was living and sleeping amongst many animals, so was beginning to look kind of wild and stressed out, but when he arrived he said how wonderful I looked and that really made me feel better. He is very sweet. Then he opened the front door and summoned in his latest gift and I remembered my mission: to end the relationship. It was the ninth day of Christmas and nine ladies dancing entered my flat. Plus everything else all over again. It was bedlam. I told him it was over. He was shocked. I’ll never forget it. He mumbled, ‘After everything I’ve done?’, and walked away, defeated.

The next morning, I’m cleaning a hell of a lot of cow faeces from my carpet, yet I’m feeling really bad about ending the relationship. Then ten Lords a leaping show up, claiming that they are a gift of utmost love from my true love, and my resolve strengthens. These are proper Lords too, dressed in high society clothing. And they’re leaping about so much that ornaments are falling off the shelves in my flat, and the geese are going mental and hissing at them. And I’m like, Lords? He got lords to do this? I’d have thought they’d be too busy. I start to wonder if I’m the crazy one. And to add to my misery over the state of my bathroom, one of the Lords has diarrhea.

My true love remains unreachable and on the eleventh day, eleven pipers piping show up at my front door. And I’m thinking, I don’t even know how he has the money or influence to make this happen. Do I even know him? What kind of person can pull off this whole elaborate display of affection? Does his family have like crazy connections or something? It’s actually, despite is startling craziness, pretty damn impressive.

On the twelfth day of Christmas he sends me everything all over again, plus twelve drummers drumming. The noise is crazy. The drumming and incessant piping sets off the cows, which sets of the geese etc, ect. The whole thing is a fucking nightmare. At this point, I’ve lost count of how many people and animals are in my house. It stinks to high heaven. And the Swans are very aggressive and have demolished many of the French hens. I stood there at my open front door, watching the drummers join the mad, freakish carnival that was now my living room, and then, out of the blue, my landlord showed up.

I did the only thing I could. I ran. I moved out and left everything. That’s how I ended up here on this beach, with you guys. Away from the threat of more gifts. Away from my true love. And away from Christmas. Just like you, every year, when Christmas madness comes to town, I fly to the tropics.

And it feels good to be single again. A big realisation for me was the fact that I never truly knew my true love. In the whirlwind of our blossoming romance, I had been blinded the fact that he is crazier than a French holiday. These days I’m focusing on myself. I still think of him occasionally; every time I hear someone playing drums, or I hear a certain birdcall, my heart drops and I spin around, expecting a bombardment of gifts. But then I look closer and see that these are free birds. Birds on the beach. Swallows, riding the warm zephyrs of the southern equator. Merry Christmas everyone.