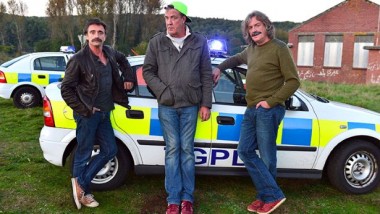 “OK, last call for ideas for the Christmas special. Can you simpering morons shock me by suggesting anything interesting?”

It was May who spoke. Far from his avuncular onscreen persona of ‘Captain Slow’, the Top Gear veteran was a fearful prospect in person. His metallic hair bristled with fury as he spoke and flecks of spittle showered the A4 pad in front of him, on which he’d doodled Nadia, the work experience girl, splayed across the bonnet of a Trabant 500, exposing comically oversized breasts.

Jonty trembled. This was his second week since making the switch from Songs of Praise. He’d only seen the show a handful of times, but he’d been advised that when it came to ideas, the more shocking the better. He had an idea. It was big. It was huge. It was repellent. It might just work.

“I’ve got…” His voice did that thing where it goes really high. He cleared his throat and tried again.

“What are you waiting for? A fucking invitation? Let’s hear it.”

“I… I… I…” mocked Hammond, entering the room. He laughed, high-fived May, and sat down, hitching up the sleeves of his jacket to expose small, mischievous hands.

Jonty steeled himself and began: “We start in Baghdad with Ahmed, Iraq’s most disreputable second-hand car salesman. With just a handful of shekels, or whatever, in their pockets, the gang (he’d been warned about this, always ‘gang’, never ‘boys’ or ‘lads’) must find a rust bucket sturdy enough to get them to their final destination – Bethlehem.”

Hammond jumped out of his chair, but May quelled his outburst with a raised hand. He sat down again.

“Let him continue,” May barked.

“OK, so, the gang are going to pass through some pretty hairy areas as they follow the trail of the wise men and along the way they’ll unwittingly incur the anger of the locals through a series of harmless cultural misunderstandings. In Iraq, May remembers too late that his new black bushy moustache and beret make him look uncannily like Saddam Hussein; Clarkson tries to make peace with a Rabbi in Jerusalem by offering him a bacon sandwich; and Hammond gets into hot water when he’s caught leafing through the latest FHM in an Islamic State enclave in Syria. That kind of thing.

“All the while there is the constant danger that one of their cars might conk out. If it does, the unlucky one will have to face the ultimate forfeit – having to ride the rest of the way to Bethlehem on Hassan, who is a camel.

“Eventually they arrive in Bethlehem, obviously all the hotels are full, but it doesn’t matter because it’s a stable they’re looking for. The first one to make it and offer their gift – forgot to mention that, each one must take a gift with them and keep it intact for the whole journey. So, yeah, the first one to give their gift to the baby in the manger, wins. The baby in the manger turns out to be The Stig, and The Stig turns out to be Damon Hill.”

Jonty took a deep breath. He was disgusted with himself but elated at the same time. There was no doubt this idea was dynamite, although he wasn’t quite sure about the last bit about the Stig. He only said Damon Hill as it was the only driver he could think of, but he figured Hill looked a bit like Jesus anyway, so it was probably fine.

Expecting applause, or at least grudging nods of admiration, he lifted his head to see May fix him with a steely glare.

“Wait there,” he said and left the room.

Jonty’s eyes scanned the other faces in the boardroom, but no one would look at him. Had he not gone far enough? This silent treatment was unbearable, but he didn’t want to ask them what was wrong, so he just waited. Outside the glass walls of the room he could see May conferring with a large, haphazardly dressed man. It was Clarkson.

His huge head loomed in the doorway. He seemed more weary than angry. Shaking his head slowly, Clarkson said: “We did the fucking three kings four years ago. You’re fired.”

At that moment Jonty knew it was going to be the best Christmas ever.