The Yawn – A Short Story by Matt Comras 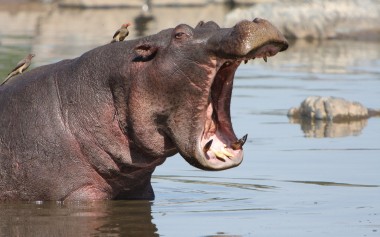 The morning’s zombies waded onto the bus. A groan escaped my mouth as my own dead arm stretched out in front of me. The reader bleeped. £1.10 left, it looked as though I was walking home.

I let the engined motion of the bus jolt me through the crowd of isolated souls until my body found a natural resting place. A small space in front of my face to cloud the window with morning breath, armpits to my left and right. The rule is the closer you get to somebody, the more disinterested you have to become. If seated across the carriage by all means look around, perhaps even meet someone’s eye. If practically cheek to cheek you must thread at least one page of newspaper between the two faces. To extrapolate, when kissing you must close your eyes and when having sex, the light must be turned off.

A deep yearning in my throat crept into my jaw and tried forcing it open. At first I resisted then stinging cracks opened along my dry lips as I gave into one of the least harmful bodily functions. I was a bored lion gazing at the many-eyed, metal snake winding its way through my enclosure. I was a malevolent hippopotamus rising from the shallows of the Zambezi. I was… choking.

Lost in sub-Saharan Africa I had turned my head to the side and with the accuracy of a prize truffler the woman next to me had lost her nose in the chasm of my yawn, as though an extra large specimen of the bounty was lying undisturbed just beneath my esophagus.

“Sorry”, I said. Or at least tried to say but while closing my mouth to the form the intended word my teeth collided with the bridge of her hitherto unremoved nose. Blood welled up in the teeth marks.

She dabbed a tissue on her nose and the specks of red confirmed my fears.

She was right to deny the blood. It’s not polite to bleed on a bus. Not in the morning.

“Someone shoved me with their bag,” she apologised.

“I was being a hippo,” I apologised.

An embarrassed smile surfaced as she politely turned her back to me and dabbed her unbloodied nose. It’s unusual to taste someone’s nose before you see their face but on this occasion it turned out to be a very good indicator of what to expect. Mousy brown hair, delicate features, electric darting eyes.

She disembarked the very next stop, perhaps to escape the embarrassment, perhaps to stem the flow of blood. This too was my stop but I stayed on so as not to further complicate the situation. I licked my teeth to see if I could find any trace of her. Nothing. I would look out for her tomorrow.