So I’m a bloody dad now, here’s what I know…

Awwwww there we are (he’s in the trolley)…. 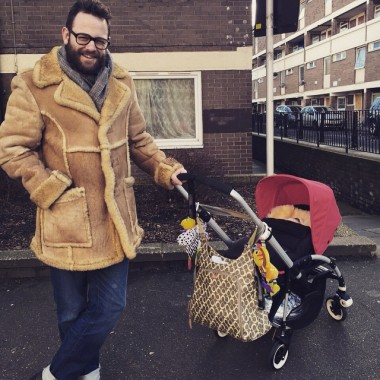 At some point between 10pm and 2am the other night my son’s umbilical cord fell off, which is a good thing because it was starting to get really smelly. Visitors could detect something funky, they thought he’d shat himself, he’d filled his little trousers and we weren’t doing anything about it, just allowing his lower half to marinate in buttery crap, so eventually I’d explain the smell and we’d all giggle and coo and that was just fine. He’s a week old. Every morning he lies on my chest for roughly an hour while my wife catches up on sleep, and every day it’s the best hour of my life. He’s miniature, I feel huge and protective and manly like we’re in the wilderness even though we’re ensconced in cotton, it’s lovely, it’s amazing, it’s a little miracle, and yet I’m well aware that it’s also insanely boring to listen to and hear about – it’s like someone taking you through their dream or telling you about their holiday. No one really wants to know how great your child is, or how they look really sweet like that baby panda when they sneeze. Hiccups are so cute too. They’re not committed to this thing like you are, their emotional involvement is tenuous at best – they like you a bit, but not necessarily the you who has decided to live his life from now on in dad-only knitwear, always half surveying the landscape for potential dangers. They liked you at the pub when you were drunk and funny, or when you stood outside smoking like you just didn’t care. You’re schtick is gone and it’s boring now. AND YET. AND YET, then again, me personally for example, I didn’t know that umbilical cords just rotted and fell off at some point in the first few weeks, I’d always thought you snipped them at the birth and then the doctor in attendance would tie them up like an expert in balloon puppetry and that’s why there’s a little knot. I was misinformed, my deductions were off, there’s not even a doctor in attendance, there’s a midwife. Hence I thought rather than bore your tits off with a long diatribe about my love for my brand new little bouncer, instead I’d compile a short piece running through a few observations from the last few weeks…

You may not need to run a nice bath when she starts having contractions – in the run up to the big day we were taught not to freak out when the contractions started, to just pour a drink, stay mellow and let science do its thing, so when my gal started wincing and groaning at around 1am, rather than call a midwife I decided to put on her favorite Madonna record and run her a nice hot bath. Twenty minutes later she was barfing in a cab with wettish hair, and five hours later we had a son. Across town a full bath gradually got much colder and a record span round and round to silence.

Those birthing pools are just a massive ballache for midwives – when I imagined childbirth I envisaged a room full of bustle, people parading in and out brandishing an array of medieval surgical tools, a nurse holding bolt cutters, a midwife on hand with a plunger, a hired thug guarding the door with a flick knife. Once in a while a doctor would come in and look under the nearest gown for a minute then casually walk off whistling. But yet again what my mind expected and what my eyes saw were at different ends of the country. Instead there were just three of us – my groaning wife, me, and an almost entirely silent midwife who reacted to us inquiring about the availability of the birthing pool as if we’d just asked to borrow her car.

Women, ALL WOMEN, are fucking amazing – this is the main life lesson I will take away from everything that I’ve experienced over the last few weeks. Women, pretty much to a man, are astonishing, brave, powerful, strong, and emotionally stable in a way that I can only dream about. I watched in total reverence as my wife took all of her clothes off and embarked on a primal inner journey as if designed and pre-programmed to just deal with it all. Any talk of pain, any telling of me to go fuck myself (which I’d been expecting) was replaced with pure, raw animal biology. It was really weird, it was a bit terrifying, and it was completely amazing. I’m now kind of in awe of her and I’m not sure that will ever go.

The unbridled emotion will erupt and it’ll be intense, and watching at the “business end” is utterly mesmerising and beautiful too– in the lead up to the birth I was fretting over my own emotional state. The whole pregnancy experience for a man is an abstract one, we can see the bumps and the big tits, but there’s no bond developing with the foetus beyond the imagined one of what it might be like. I was worried that I wouldn’t love my baby, or that I would feel cold and unmoved as it emerged into post-abstract physical form as a live-action human being. I’d also wondered about the wisdom of watching it tear through a vagina that I’d valued so much for so long, but watching from the immaturely-coined “business end” was a thing of true wonder, and as my little boy tumbled from the womb and into the world a rush of emotion hit me like a tidal wave and I wept with utter joy and loved him immediately. I continued to cry on cue for at least three days afterwards, even now I’m basically a sudden sneeze away from bursting into tears. He’s so cool.

All of my things already feel like artifacts from a former life – records, box sets, cans of lager still in the fridge, buying two pairs of trainers at a time, big long books. There’s not going to be time is there? Or is there? Actual question – is there?

3 Responses to So I’m a bloody dad now, here’s what I know…