She was a goodie alright 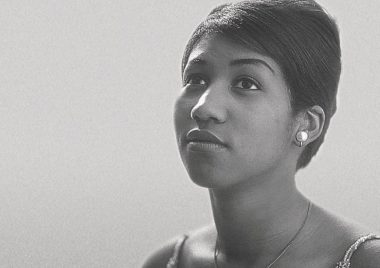 The world is a much sadder place without soul music’s finest, but while the obits have been rolling in, another fact has become inescapable – Aretha Franklin has a body of work that seemingly remains untapped. Yes, tracks like Think and Respect, and I Say a Little Prayer, are amazing. As is A Natural Woman, or I Never Loved a Man (The Way I Love You). But let us not forget these rare and bare, and oft overlooked, gems either…  what a gal

Without The One You Love (1962)
Aretha had just turned 20 when she recorded this, her first self-penned tune to make it to vinyl. The beauty of the sweeping orchestration is off set by the anguish of the lyrics and, of course, that prodigious god-given voice. In concert she would perform it simply, accompanying herself on piano as only she could, and suggesting a worldliness well beyond her tender years.
Available on ‘The Tender, The Moving, The Swinging Aretha Franklin’ (1962)

There Is No Greater Love (1965)
There’s a sweeping generalisation that Aretha’s Columbia tenure was marked by a tempering of her innate gospel fervour to accommodate polite supper club standards. Her seventh album Yeah!!! tells a different story – no more so than on her ferocious take on this classic, latterly revived by a certain Miss Winehouse. Aretha fearlessly tackles a tune associated with the likes of Lady Day and Dinah Washington, leaving no doubt a new Queen was in waiting.
Available on ‘Yeah!!!’ (1965)

My Song (1968)
A rare non-album b-side from the Queen’s Imperial phase at Atlantic. My Song was too good to squander in obscurity, and black radio soon flipped her current hit See Saw to award her her 12th R&B top ten in less then two years. She once revealed she chose this vintage Johnny Ace cover as a tribute to her mother who died when she was just nine. “You told me that you would leave me here in tears…” she laments. The sound of a heart breaking.
Available on ‘Queen Of The Soul – The Atlantic Recordings’ box set (1992)

Sweetest Smile And The Funkiest Style (1972)
Ree at her most loose and earthy. One of eight outtakes from her outstanding, overlooked Quincy Jones’ collaboration Hey Now Hey (The Other Side Of The Sky) that didn’t surface till more than three decades later. Aretha gets down and dirty over a smouldering funk jam that’s ripe for rediscovery.
Available on ‘Rare & Unreleased Recordings from the Golden Reign of the Queen of Soul’ (2007)

I’m Your Speed (1978)
Even during her late 70s/early 80s commercial wilderness, there was always one songwriter that could be relied on to bring out the best in Aretha: herself. A paean to her new-found happiness with second husband actor Glynn Turman (who generously received a co-write credit) I’m Your Speed is simply, and spectacularly, Aretha alone at the keyboard. Jaw-dropping.
Available on ‘Almighty Fire’ (1978)

It’s Gonna Get A Bit Better (1979)
Aretha’s Atlantic swansong was unceremoniously dismissed as a misjudged attempt at disco and remains her lowest seller for the label, failing to crack the top 100. Those who listened found producer Van McCoy also stirred a healthy dose of R&B and funk into the stew – especially on this blistering Lalomie Washburn-penned jam, fresh off a recent Rufus & Chaka hot soul chart-topper.
Available on ‘La Diva’ (1979)

The Wind (1983)
Luther’s enduring passion for (and occasional spats with) Lady Soul were well documented. Less known was his fascination with esoteric singer-songwriter Laura Nyro. Here Vandross lovingly combines both, updating Nyro’s ethereal refashioning of this 50s doo-wop classic for a criminally-shelved cut from the Get It Right sessions. Ree at her most sublime, complete with a Miss Ross’ style monologue for good measure.
Available on ‘Dedicated To Soul’ Various Artists Compilation (2007)

If I Lose (1992)
However hit and miss Arista’s attempts to keep Aretha ‘current’ were at this stage (on reflection Paula Abdul’s producers weren’t Mr Davis’ best decision) give her a decent tune and she could blow down the house. Ree is clearly comfortable on this rarely heard soundtrack cut, a smokey 4am barroom blues, seeped in regret. “Some you fake and some you feel” she sings at one point. She felt this one.
Available on ‘White Men Can’t Jump’ Soundtrack (1992)

U Can’t See Me (2006)
Well into her 60s, Aretha was still more than capable of unexpected levels of swag and swing when the spirit so moved her. This jazz-injected gem sees Miss Ree inspired to a rapturous scat section before delivering a playful kiss-off to a former lover. Shameful that it took her five years to find a distributor for what was to be first, and only, release on Aretha’s Records.
Available on ‘A Woman Falling Out Of Love’ (2011)

Rock Of Ages (2016)
Almost two years to the day before her passing, Aretha returned to her father’s church in Detroit to record this potent take on the evergreen hymn. It’s an almost unbearably intense full circle moment, that channels joy, mortality, pain and pure release so purely and viscerally, it deservedly ranks amongst Franklin’s most transcendent moments. Amazing grace indeed.
Available on TIME YouTube channel (2016)