I’ve been a dad-of-two for three months, here’s what I know 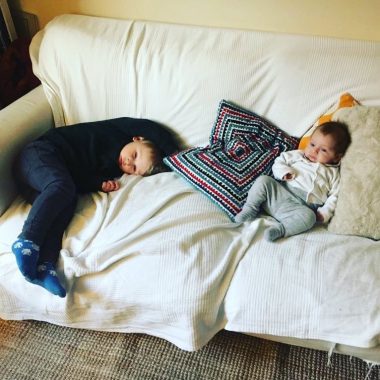 You always get that one character in cowboy movies who’s seen it all. He’s a gnarled, grizzly old gunslinger who’s been there, bought the t shirt, eaten the pie, and picked up the wisdom of the road. He can spot folly and freedom from a mile away, he takes no prisoners when he talks. There’s not an experience in life that he didn’t live a thousand times over before you came along. With your hopeful eyes and your bullshit. Now he just wants to eat his grits.

Oh yeah, he’s also a complete tool. Which is worrying because he’s basically me. Because now I have two children, you see. Not one child, not no children. Two. So, I’ve been there, bought the t shirt etc. I’ve watched two live births, I’m wizened and worldly. I look at brand new fathers, proudly wandering through parks with their offspring slung in slings on their chests, rocking their babies in their arms in the pub, and I chuckle condescendingly to myself about how easy they have it. I look at children-less couples, and wonder why they aren’t deliriously joyful, having not been in the trenches, having not endured the endless pukey midnights of the soul. I’ve seen some stuff. Stuff that would make your skin itch. Like eczema.

But, the truth is, beneath the veneer, after three years of doing this with one, and three months with two, I’m no wiser. My hair belies everything by producing the odd grey one, but all my parenting up until now has been based on guesswork and desperation. We come up with rules about when TV should be watched, or how bedtime should be implemented, but those only last until we’re too tired to enforce them anymore (i.e. Normally less than an hour after concocting them). Second time round we’re still just novices, and perhaps no matter how many of these things we churn out, that’s all we will ever be.

Perhaps you can only ever become a good parent retrospectively. When the reality of your life becomes hazy, and you get to rewrite bits of history to say you rode with Billy the Kid, or that you fought off fifty Union Soldiers. To recast yourself as being a weather-beaten hero, profound, wholly adept and expert at the intricacies of life.

But really you know nothing. That’s why you just want to sit there, grow your beard, and eat your grits in silence. You’ve literally got sod all to add to the conversation.

This month I learned that:

When my daughter smiles it’s like a zillion sunrises