I’m a father-of-two now, here’s what I know…

There we all are, a strong bloody unit 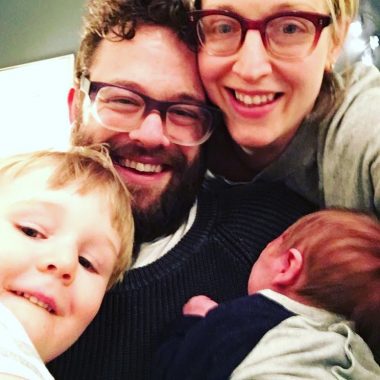 It’s been a funny few weeks for me, by which I mean funny strange more than funny ha ha. But also funny ha ha in a demented kind of way, and funny brilliant, funny tiring, funny emotional, funny stupid, funny-not-funny. I have a daughter now, see. She’s the size of a puppy. Morning broke, I went into hospital hand-in-hand with my wife, a lady wandered in with a knitting needle, and it wasn’t long before water broke too. We stayed hand-in-hand as her grip gradually tightened and her face contorted, her vagina pulsated (I’m assuming pulsation), and groans turned to shrieks. Then, a short while after, from an actual labour that lasted 15 whole minutes (!!), splat, out came a baby, then shortly after that, another splat, and out came a big bowl of meat called her placenta. A throbbing, bloody mess that women all over the world are known to eat, and in many ways it’s easy to see why. It’s a hulking great cut of offal. Add some oats, grains and spice, and you’ve got yourself a good haggis, perfect with neeps and tatties.

So now I am the true definition of a family man. I have two children, the full set. One boy, one girl. The daughter is cute as a button and either permanently attached to her mum’s gigantic engorged tits, or enjoying one of her million impromptu naps. In those short periods where the planets align I’ll grab her for a few minutes to stare besottedly at her little face, re-introducing myself as her father, in case she might have forgotten. The house echoes with the sounds of hungry crying or tired crying or angry crying, and frequent bursts of hysterical squealing from the older boy too, for all manner of different reasons. Because you gave him the wrong fork for his tea, because the TV schedule doesn’t reflect his expected listing, because you asked him to put a T-shirt on and now he thinks you can fuck off with your stupid rules. It doesn’t take Harvey Weinstein to figure that he’s deflecting his confusion onto mundane problems, channelling his discombobulation into his day job as a toddler, when really, all he wants to know is WHAT THE HELL IS GOING ON HERE? WHY HAVE THINGS CHANGED? AND WHO THE FUCK IS THIS NEW CHICK WHO’S STOLEN MY MUM AND RUN OFF WITH HER KNOCKERS?

Problem is, aside from re-explaining the concept of siblings, or profusely apologising for the unfairness of the world, there is nothing to say. No one really knows what’s going on. It’s a blurry mess. I’m in the middle of this thing – you might even argue that I’m a majority shareholder in it – and I don’t know. We made a choice based entirely on speculation, and now we have another mouth to feed, and another head to roof, another overactive, offensively smelly bottom to wipe, while we simultaneously adapt to a completely rearranged landscape pretending like nothing’s really changed. Attempting to navigate through the fog-cloud of sleep deprivation and elevated anxiety to explain the intricacies of birth, suckling, and spiritual nourishment to a toddler is more than the Ten Tasks of Hercules put together. Made harder still because he hasn’t figured out how to casually sip a drink without pouring the whole thing on his face, so most of the time you’re snorting laughter through your nose while he’s attempting to get serious.

I’m not sure what my point is here. I think it’s that anyone who does this is nuts. It’s a thankless, mucky task, full of shit, piss and tears. Most days at least three of you will cry, at times all in one go, like there are leaks springing all over the house, and you’re a one-armed plumber trying to fix them all. Sometimes you find yourself wishing the years away, so that everyone can just be grown up, and your kids can buy you drinks and tell you what a great dad you were, and ask you to tell them again about World War Three and the time Donald Trump blew up the wrong Korea by accident. But then, in amongst the clanging din of panic and bewilderment, you hear the soothing sound of birdsong as a small child half-whispers “Twinkle Twinkle Little Star” to a sleeping baby, and you realise that you haven’t just created new life, you’ve created new love. You see with your own tired eyes that he hasn’t dedicated his childhood to destroying her for stealing his thunder, but actually he’s taken her under his wing like a small cute penguin would a marginally smaller and slightly cuter penguin. You look over at your woman, both sitting up now, watching, with glassy wet eyes, your mouth trembling as it tries to maintain a composed grin, you feel a warmth emanating from deep within, from a place that can only be your soul, and you see not just new life and new love, but all life and all love, all fellowship, all togetherness. And then she pukes milk onto his hand and he’s fucking outraged.