A piece about the complex nature of father/son relationships 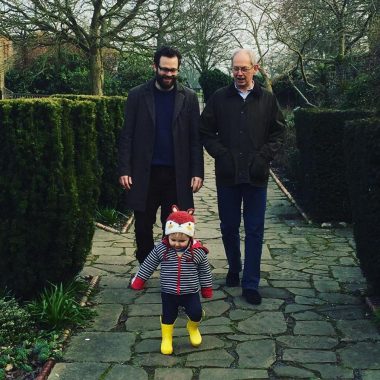 It’s funny how the role of your dad changes over the course of your life. When I was little, he was the grinning giant who swung me round and round and made me giggle, or he was the Peter Shilton to my Diego Maradona in the back garden. In later childhood he became the whispered-about Keyser Soze, the enforcer of rules and regulations, at times his looming presence was a mythical threat – “just wait until your father gets home!” “dad is going to flip out!” etc – like he was some kind of Darth Vader who would literally turn up from work and murder you for not eating your vegetables. But then he did get home, and after all that stoking of the coals, he’d seem surprisingly nice, like Darth Vader but right at the end of Return of the Jedi. All chilled out, sweet natured, although possibly not as weird looking as that sonovabitch.

During my teens, most of which I spent trying to house a Tetris of hormonal changes (with the sophisticated grace of an escaped mule) my father was many things. Sometimes he was the sniggering Greek Chorus assessing my interpretive stabs at fashion, other times the proud old man cheering me on from the sidelines. He was my cabdriver, my doorman, sometimes my therapist. As I grew into my 20s, he inevitably became my bank, my bailout, the one I’d approach cap in hand, pleading desperately for a few extra bucks like a wiseguy soon to be whacked. He’s been my biggest critic – he described the first book I had published as “no Cormac McCarthy” (he was right), and my second book also as “no Cormac McCarthy” (right again!). And fairly occasionally he’s been my champion too (even though, as established, I’m no Cormac McCarthy).

Our story is pretty typical of most fathers and sons. The frequency of his involvement in my life has varied, as it does when people have careers and jobs and a conveyor belt of mouths to feed, but his essential role in it has never diminished. He was my comfort as an 8-year-old when I had my cheek ripped open in a bizarre “piggy in the middle” accident, also when a psychotic rabbit with razor teeth bit my finger when I was a tot, and also when I somehow shat myself in public at a campsite when I was about 6. Then, despite some geographical distancing (I’d moved to London), he was still my first port of call when, aged 23, I thought I’d suffered a mental breakdown (I hadn’t). He was the person I spent my 30th birthday with, just me and him, in a pub (styling it out like it was totally normal). He was the shoulder I cried on during my biggest wrestle with depression, aged 34. There was even a time in my early 20s when he agreed to examine my naked adult penis*, because I had become petrified and paranoid from staring at it too long, somehow convincing myself it was riddled with a thousand STDs.

(*FYI it wasn’t – and I should probably point out here that my dad is a medical man, I wasn’t just showing any old punter my dick. I’m not insane.)

The point being that there is so much more to a father/son relationship than is often depicted. In movies and TV shows, dads are often painted as men with one setting. They’re inept idiots, like Homer Simpson or Daddy Pig, or Clark Griswold or George McFly – the latter being so cack-handed that his son sought life lessons from a local Jimmy Saville. Or they overshadow everything like intense fog clouds of ruthless ambition, and even terror, like Vito Corleone, or Daniel Day Lewis in There Will Be Blood.

They’re sometimes seen as loving but flawed and overprotective, suffocating their children like Marlin in Finding Nemo, or selflessly shielding them from a brutal reality like Roberto Benigni in Life is Beautiful. Even at their most saccharine, there’s still an ocean of suppressed emotion getting in the way of just being normal. Look at Kevin Costner and his dead dad expressing their love unspokenly by chucking a ball back and forth in Field of Dreams – it’s a relatively cliché act of repressed affection, yet you’d be hard pushed to find a dry eye in the house. The absent father creates a void that must be filled, the disinterested dad tempts sadness and rebellion, the weak dad invites shame.

But the reality of life is that actual, non-fictional, factual dads fall into all of these character types at any given time. Their role changes with the wind, and a dad is basically all things at once – inspirational, inept, cruel, kind, overbearing, invested, uninterested, awkward, loving – and because of that I’d argue that the bond between father and son is often the most complex human relationship there is.

For some, it’s shackled and stilted by old-fashioned notions of how men should behave around each other – drowning in a sea of outmoded lip service. The handshake hello, the awkward hug with an inordinate amount of backslapping, the endless discussing of sport to avoid any real depth. But it’s also a relationship capable of being unbelievably tender, because, beneath the veneer, no one really understands what you’re going through like your dad does. He’s been there. He too was once the second rung of a staunch hierarchical structure, with his own dad (your grandfather) above him. The difference being that when he was in your shoes, the world was in black and white, nothing cost more than ten bob, and there weren’t so many metrosexuals clogging up the queue in The Gap. Back then public displays of affection between men were strictly prohibited, punishable by whispering and mockery.

And now I find myself as a father. I have a two-year-old boy and another bun cooking away in the oven as I write this, and our relationship has changed once again. It’s upgraded itself. Where I am now the grinning giant swinging my son around, or playing Joe Hart to his Lionel Messi in the back garden, my dad is the contented grandfather, proud to see me grow, but happy to offer council when it’s needed too. I have graduated up the ladder, and as such I now have a clearer vision of what the reality of his life would have been all those moons ago – when he had me (the third of four) at the ripe old age of just 28. I now understand that he wasn’t Shilton, or Keyser Soze, or Darth Vader, or George McFly. He was just a man, like me, learning as he goes along – doing his best to get parenting right.

When I started writing this piece, I emailed him to ask him what fatherhood had taught him about himself, and he replied with these words:

“Until I had children I didn’t know if I was capable of unconditional love. Turns out, I was.”

Now stop crying, and go and give your dad a hug.