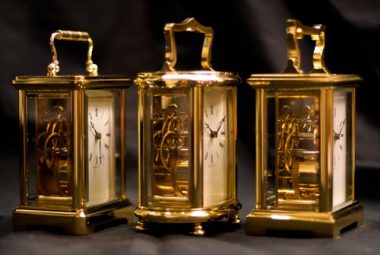 On top of everything else that 2017 has spewed forth – like megalomaniacs, nutjobs, endless social media outrage, the continued awfulness of grapefruits – apparently now I’ve got to work until I’m in my mid-70s. An age that one of my grandfathers, despite what seemed like a pretty full life, never made it to. Also an age which means, if things go according to plan, that I’ll be attending my work leaving party with a horseshoe of course grey hair, a pregnancy gut, a ‘til death do us part’ love affair with light beige slacks, and one shiny-as-fuck carriage clock. I don’t think I’m getting too far ahead of myself here when I say that I won’t be doing a lot of illicit snogging with my colleagues that night. Partly because I’m not Mick Jagger. And also partly because I’m not even Bill Wyman. Also partly because I’m freelance – I don’t have a job.

I suppose the point is that I haven’t seen too many really old guys padding about the place, churning out side-splitting tweets in the digital agencies that I occasionally do shifts for (for part of my income), and I suppose that at some point I’m going to be forced to acknowledge that Grazia’s readership won’t want to hear about how often I boff my wife, or that Shortlist devotees won’t be hooked by my 2000-word overwrought think-pieces on how I wear my pubes these days. At some stage – and this is the bit that really hurts – people might stop being fascinated by how my son’s life is progressing (you heartless pigs).

Along the way, on this cruel conveyor belt we call LIFE, I might even have to accept the fact that old stalwarts like newspapers and magazines might find less of a calling for an elderly hipster in their midsts, and that even new-fangled technologies like “websites” and “the net” and “Twitter” that have endless “reach” and supposedly enough room for all of us, they mightn’t be the stable pillars of rich employment for a guy with an embarrassing rusty earring and a combover – that they were virtual castles built on pixelated quicksand for the old. My chief concern, at this rate, is that it’s only a matter of weeks/months/years, before I’ll have to look in the mirror and actually sit down with my reflection (over dinner?), and hammer out what to do next with my life.

That’s a daunting prospect. In part because my reflection is one of the weirdest people I’ve ever met (constant eye contact, it’s eerie). And also because I’m not qualified to do anything else – I have no other skills (I was going to say “apart from having sex!” but that’s not true – I wouldn’t even be a decent fetish hooker for people who enjoy grey pubic hair and a saggy scrotum).

And then we get to “hope”, that cruel, flirtatious, faraway mistress. That enchantress singing in the breeze, dangling what looks like a carrot (but could be a turnip that’s been painted orange, so hard to tell with my eyesight) just centimetres from your nose, as she whispers platitudes in the wind. “There are other writers out there,” she blows, “good ones too – old, bit withered, I’ve seen them with my own eyes, they’re doing okay, they seem to buy things and have new clothes, some of them drive cars.”

But then, never too far away, there’s “doom” – hope’s bastard brother – and he barges into the room clanging pans and saying cruel, unkind things to make your heart pound out of your chest in the middle of the night: “could you make it though? Because, you know, perhaps you couldn’t make it? Perhaps it won’t happen?”

And so I lay there in the still of night crippled by a foreboding sense of worry that won’t shift. Worry that the industry I wandered into completely by accident almost 20 years ago will drive off without me at any given moment, that it’s got nothing for me anymore, that it’s looking to freshen up, bring in some brighter, younger, cleverer guys with funnier words and tighter trousers and a single dainty tattoo of something meaningful on their arm (like a cross, or an anchor, or a woman’s thumping heart). Kids with dynamite ideas and “social media presence” who know how to snapchat. I worry that I’m in an industry that used to let you grow old and grow roots, but now just doesn’t have the patience, nor the resources for that to happen. That there’s no real contingency plan for anyone, just a perpetual undercurrent of numbers numbers numbers, sell sell sell, freshen freshen freshen, and that at some level we’re all fucked by the inevitability of getting older, and that we’ll have to beg for work with our final, diminishing breaths.

But hey, that’s just me speaking as a freelance writer (a completely ridiculous job)! A fluffy, semi-employed lipstick liberal, who can idly procrasturbate or look for grey hairs or wistfully stare out of windows pretty much whenever the mood takes hold of me. Today, for example, I wore a cardigan and slippers all morning and had a swim (all backstroke) at lunchtime. What have I got to moan about?

Shall we just get drunk and have sex? We can talk about my existential crisis in the morning.