The Ultimate Guide to Provence by Rory McClenaghan

Look at this beautiful French view 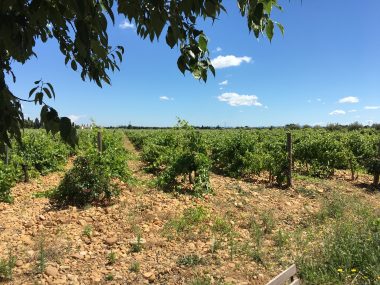 Are you planning a trip to Provence? Have you just added a copy of Peter Mayle’s much-loved memoir A Year in Provence to your Amazon basket? Well, don’t proceed to checkout just yet, traveller! While Mayle spent a whole year dragging out 200 pages on Provence, I have managed to capture its essence in just ten days and 823 words. I’ll let the reader decide which is the better account, but those numbers don’t look good for Mayle.

Anyway, as I’m sure Pete would agree, Provence is a region of contrasts. From sun-ravaged peasants, to sun-kissed rich people, this place has it all. But to get the best out of it, you’re going to need a guide, so take my digital hand and let’s begin…

Shop like a local
If books and ‘foodies’ are to be believed, the average French person’s day begins at the crack of dawn when they visit the ol’ boulangerie to buy a piping hot French stick. They then return to their mistress/mister-ess for a quick recreational before heading out for a short day of industrial action. Don’t listen to these philistines! The French are actually visionaries when it comes to shopping. Since the ‘60s the Gauls have being screaming Bof! at small businesses and whispering oh la la to that cathedral of commerce, the hypermarché. On my visit to E.Leclerc (my third favourite hypermarché behind Intermarché and Super U) I purchased four boxes of firelighters, a wetsuit, Rush Hour 2 on DVD and 160 small bottles of Kronenbourg. Can you get all that in your boulangerie? (Rhetorical question, you can’t).

Enjoy a Gallic tipple
Speaking of Kronenbourg, in France it has a lower alcohol content and comes in smaller bottles. Whoah there, champ, put that garden chair down! This is actually a good thing. Those missing few percentage points and tiny vessels can make you feel like a booze behemoth. Can you get through 20 of those bad boys in a day? Of course you can, you’re David Boon, the keg on legs!

If you’re feeling a little more adventurous and are comfortable with your own sexuality, you can kick back with some pink wine. We all know the two wine types are red and white, but these crazy scientists have done the unthinkable and mixed them both together. You can buy the pink stuff pre-mixed from the hypermarché, but if you’re worried about losing vital man points, buy a red one and a white one and mix them up in the comparative safety of your own home.

Beware the Mistral!
The Provencalese are a pretty cheery bunch, until the subject of the Mistral comes up. As soon as someone drops the m-word they start speaking in sinister, conspiratorial tones, like they’re warning you about a very efficient murderer who has just moved in next door. But chill out guys, a bit of internet research reveals that the Mistral is no Boston Strangler/Yorkshire Ripper/Singapore Stabber, it’s actually just the wind! No one knows why, but every so often, the wind gets a bit blowy, probably something to do with the moon. Anyway, it isn’t really that bad. My advice? Leave your hat indoors.

Take part in the local pastimes
Every evening thousands of ageing Frenchmen congregate in car parks and get their balls out for a game of boules. The object of the sport is to throw big balls at a little ball, closest to the little ball wins. It’s pretty easy and I have no idea what all the fuss is about really, but there you have it.

Don’t mention the war!
“My my, at Waterloo, Napoleon did surrender,” not my words, the words of Bjorn, Benny, Beaky, Mick and Tich, AKA Abba. It may be over 200 years since the Duke of Wellington put the boot in (ha!) to Napoleon at the Battle of Waterloo, but singing these words loudly in a Provence restaurant showed me that the Frenchies aren’t quite over it yet. In their icy stares I could see they still cursed the decisive arrival of Marshal Blücher’s Prussian army (which allowed Wellington to land the decisive blow, of course). If you want to avoid a similar situation, keep the banter off the battlefield, mes amis.

And there you have it, guys! Sometimes all you need to get under the skin of a place is ten days and 823 words (take note, Peter Mayle). Now that we’ve reached the end of the tour, please release my digital hand and be on your way. But remember, if you’re visiting Provence, pop your own tips in the comments section below. But don’t forget that this being the ultimate guide, your suggestions won’t be as valid as the five I have mentioned above. But give it a go anyway! Thanks for watching.