Ten of the best, forgotten, Prince covers – by Adam Mattera

Here’s to you, oh Purple One 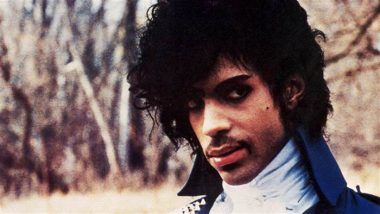 In the weeks following the sudden passing of the totally brilliant and never-to-be rivalled rock-funk superstar, much has been written of his seemingly tireless pop smithing genius. The groundbreaking hits he wrote for himself. The unheard triple album box sets that still fill his mysterious vaults. The tunes he penned for his sprawling stable of (more often than not lingerie-clad) proteges (from Sheila E to Carmen Electra) and the smashes covered from his catalogue by everyone from Sinead O’Connor to – shudder – Tom Jones. And there’s a whole heap more only the most dedicated Paisley Park devotees will have happened upon. So here, for your purple-tinted and lavender-scented delectation are ten of the best…

When You Were Mine – Cyndi Lauper

One of the pivotal songs to really establish Prince as a polymath pop writing genius. It never turned into a transatlantic chart topper like I Feel For You did for Chaka, or Manic Monday for The Bangles, but quietly became a bonafide rock standard almost by stealth. Cyndi’s was the first of many covers of the tune – once dubbed ‘the history of rock n roll in one song’ – reworking it into a new wave juggernaut for her kooky debut album She’s So Unusual. Cunningly Cyndi didn’t change the gender in the lyrics, adding a further twist to the bisexual subcurrent of the number. Kinky.

Nothing Compares 2 U – Jimmy Scott

No contest, one of the great Prince ballads – maybe the best – up there with Sometimes It Snows In April and I Love U But I Don’t Trust U Anymore. First recorded in truly remarkable fashion by The Family, the spookily androgynous voice of late great jazz legend Jimmy Scott heaps on the heartbreak as only he could. He was 73 at the time. Side note: for more septuagenarian soul antics check out Aretha’s hook up with Andre 3000 for this swinging jazz take on the song.

Ragamuffin R&B trio TLC – second only to the multi-talented Victoria Beckham and pals in the 90s girl group sweepstakes – were obviously big fans of his Purple Highness. Before they covered If I Was Your Girlfriend for their million selling CrazySexyCool album, the girls turned the sass-o-meter up to max for this lesser known gem. Originally penned for his pimp-funk proteges The Time, in TLC’s hands Get It Up became less of a threat and more of a demand – enough to get any prospective suitors packing their viagra by the pocketful.

How Come U Don’t Call Me Anymore – Stephanie Mills

Prince could dream up hits in his sleep. This one was tossed away on the b-side of 1999. A spectral piano lament in his hands, soulstress Stephanie took it to a whole other level – swooping and hollering around the tune with joyful, jazzy abandon. So good in fact that Alicia Keys almost covered it lick for lick on her debut album 15 years later. Let’s hope Stephanie at least got a thank you note.

The Jackson clan were clearly fascinated by his Purpleness – Michael quite rightly considering him his only true rival during his 80s Imperial Phase (sadly their slated duet on Bad was never to be) and Janet turning to his ex-Time bandmates Terry Jam & Jimmy Lewis to power her career into overdrive with Control. But before all that, notorious Jackson sibling LaToya (prone to removing all her clothes for Playboy on occasion) took this rollicking gem from Controversy for a ride. It made sense LaToya dug Prince. Look out for the bit where she changes the original lyric from “you belong with Prince” to “you belong with Toy”. Genius. It was a single in Japan.

This is an odd one. One of the Purple Pumpernickel’s weirdest songs, recorded for a weird MTV generation Shakespeare movie, and transformed into a weird pumping gospel-house barnstormer. But weirdly, it works. The then 13 year old Quindon never quite got the Usher-esque career he deserved but, rest assured, is launching a comeback here.

Miss Crawford’s reputation as a soul stylist supremo was secured by the late 70s, thanks to global megahit Street Life. Still, by the time Prince started flashing his g-string to the world a few years later, Randy had comfortably slipped into buppie soul autopilot. Praise be to his Royal Badness then for the gift of Purple Rain, that revitalised Randy to lovingly tease out its country-rock roots for a gloriously soulful mediation on love, pain and precipitation

I Wish U Heaven – Darren Hayes

A brave man, Darren to attempt this. Aussie songsmith and one-time Savage Garden star strips down one of the less celebrated tunes in Prince’s cavernous catalogue to a bare-bones piano and vocal sketch – something akin to a kind of falsetto high-wire act. He also does a very nice Thieves In The Temple.

Take Me With U – Sharon Jones & The Dap-Kings

Blissed-out hip hop mavericks PM Dawn – best known for that one that sampled Spandau Ballet – mix up a mournful take on his funkinesses’ apocalypse party anthem with a dash of Talking Heads and a whole hunk of Harry Nilsson. And why not? Side note: head Dawnster Prince Be The Nocturnal is the only person on this list to share a name with Mr Rogers Nelson.