I’ve been a dad for a whole year, here’s what I know… 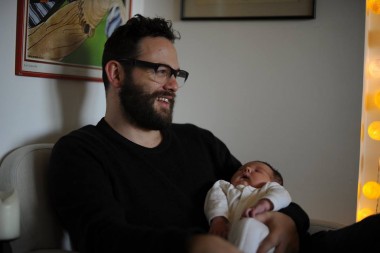 My son is one now, next year he will be two, and the onward journey will clock up extra miles every year until he gets pickled in vinegar at the ripe old age of 114. Unfortunately at some point before that I’ll die – probably in about 50 years, by which time he’ll be an approximation of me now, but hopefully with a jazzier outlook, a firmer torso, and perhaps a stronger less wishy-washy vocation than “writing for a living”. My plan is to spend the next 20-30 years hounding him in the direction of something solid like “business”, I might dress him in little suits and talk to him like I’m Alan Sugar – I’m aiming for his first word to be “acumen”.

But for now these blog posts are coming to a end, this is the last one. Every month I’ve listed my observations, some which were genuinely news to me, lots of which were just vague attempts at being funny. I’ve learned how to change nappies without retching, I’ve sung myself to sleep numerous times while he has remained wide awake, but without wanting to sound too wanky about it, the most striking realization has been how having a baby doesn’t really change the world around you, but totally reorders everything inside you. You expect the landscape to shift, but really it doesn’t. You still go to work, you occasionally see your friends, you attempt to live your life as you did – the only difference is that none of it makes sense anymore. The foreground remains the same but the background is a cluttered basement where nothing is where you left it. A baby has stolen almost every thought you have. Every decision you make comes with an extra dimension.

You’re vulnerable in a way you haven’t been, for the first months we were living in constant fear of getting everything wrong. There was a time when he was super thin and losing weight and I’ve never been more scared in my whole life. There was a time when he got a bit of potato stuck in his throat and we had to hold him upside down and whack him on the back to dislodge it – afterwards I’ve never wanted to reignite my love of smoking more. There was a time when a nurse gave him an injection and first he, then my wife, and then I all started crying like we were doing a really unusual interpretive round of Frere Jacques. The intensity of emotion that hit me during those early stages sometimes felt unbearable – I’d think about my boy at home and actually yearn to see him.

Now he walks, he dances if music comes on, he is constantly making a noise that sounds like he’s aping real human conversation. He’s great. He’s not a baby, he’s a boy. Sometimes I miss the baby who I could just plonk down and he’d stay put. I miss wrapping him up like a sausage roll in a ridiculously tight swaddle and just grinning at his tiny little face. I miss him sleeping on my chest for a couple of hours in the morning.

So now I get to look forward to another lifetime of vicarious living, where once I watched my dad playing cricket, now I’ll get to stand on the sidelines and cheer my boy as he plays football, or ice hockey, or performs ballet, or slam poetry or comes second last in a cross country race. Sometimes he’ll think I’m the best dad in the world, other times he’ll think I’m a dick. As all father/son relationships do, ours will become steeped in maleness and greetings that are lost in the sea somewhere between a cuddle, a handshake, and a hug – the rate of acceptability for fatherly kisses will dwindle and wane, there may even come a time when he winces when I kiss him and a little bit of my heart will break. He will embark on his own journey, he’ll look to carve out his own niche, he’ll form a street dance collective and change his name to Neo, he might be really good at baking things. He’ll edge closer to manhood, he won’t need cuddles from me when he’s upset, he’ll be able to have a bath without someone constantly sponging soap into his eyes by accident. And in the middle of it all, mainly because men are men are men, chances are I’ll never really find the perfect moment to tell him the truth – which is that he is solely responsible for the best year of my life.

I love you, Gabriel.