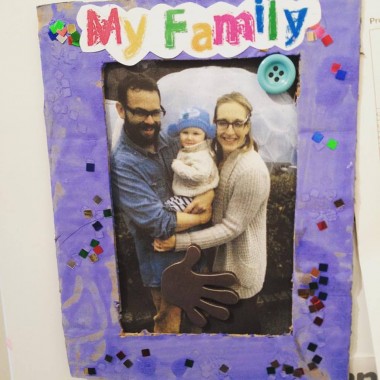 So we’ve almost made it through a whole year of this – I’m now in a constant state of being just barely under the weather. It’s almost undetectable, just a couple of sniffles or a very dull ache in my throat, but it’s there, lingering in the background making me not quite well, and it’s all thanks to the lad starting at nursery. Before that we were all strong as oxen, full of beans and energy and I genuinely hadn’t had a sick day for at least five years. Now I sit at my desk unable to breathe through my nose, off my tits on hot lemony drinks because my son coughed illness into my eye socket or smeared some disease from his hand into my ear the previous evening.

That said, nursery has worked wonders for the boy. Since starting he’s graduated from crawling around like a Pillsbury Commando to walking like a clumsy war general, he’s learned to yell things that if you squint your ears almost sound like accurately conjugated German words, he’s doing everything he can to become a normal functioning person. Should things go accordingly, our plan is to have him wiping his own bottom, pouring us cocktails and driving himself to appointments by next February. Here are some other revelations from Month Eleven of this strange and unusual journey…

They’re the easy bit, knowing which bits of your old life to keep hold of is the hard bit
This probably isn’t the blinding revelation it felt like after nine lemsips and a slice of hash cake and some LSD and cocaine, but it occurred to me that raising a baby is actually the easy bit in all of this. It’s a pleasure watching them grow, you look forward to spending time with them, even their nappies start to smell okay. It’s attempting to maintain the bits of your old life that you valued which is the really hard part – the friendships, the hobbies, the hours spent in pub gardens or pub car parks or sniffing glue in tree houses. Making the most of your career, meeting new people, walking around blindly having adventures. It must sound obvious to anyone who has children (or just common sense) but I hadn’t considered that to let something so dramatic into your life, you have to do a massive spring clean.

They definitely love their mums
Something very fascinating happened two days ago when I came home from a trip abroad and sprawled myself lovingly over my wife – the lad clocked it from across the room and marched over with a stern, expressionless face to push me away. It was a glorious David Attenborough moment from a monkey documentary, the little chimp marking his territory, telling the big fat gorilla to back off. I scurried up a tree to sob, while he marched around the house just pissing all over the place.

At this rate I will never make it through a goodbye without blubbing
On roughly three occasions in the last eleven months I’ve had to bid a quick farewell for a couple of nights while I go away for work reasons. I’ve yet to master doing this without bursting into tears as if I’m off to war. God help us if they bring conscription back.