Being all cheerful in the garden… 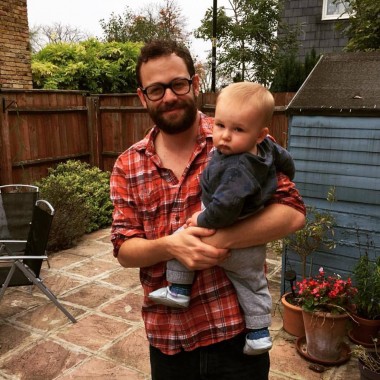 If there’s one thing that’s happened to me over the last ten months, it’s that I’ve become an industrial sized pussy. I was always a little bit of a pussy, but now I am literally the biggest pussy the world has ever known. I’m the Godzilla of pussies. My entire life may as well have an emotive Coldplay track playing in the background. If I was ever in a standing ovation situation and I actually got a standing ovation, it would be because I was collecting the Oscar for Best Pussy and I’d die from blubbing during my acceptance speech. I am, you might have guessed, very in touch with my emotions.

I’m vulnerable. Fatherhood has given copiously with one hand – I have a son who has said nothing but entirely changed the way I think – and then taken away with the other, by effectively removing my spinal column, and taking whatever inner resolve I might have had and turning it into marshmallows. I now dream of living in the countryside, which is a ridiculous thing to dream about because the countryside is literally teeming with rational country folk who hate people like me. I’m scared of animals and can’t drive.

I can’t watch anything on TV that alludes to the relationship between parent and child without welling up and squeezing my wife’s hand. I can’t hear reports about gunmen on the streets of Paris without imagining what it must be like for the hundreds of parents who have been forced to see the story they started finish so brutally and abruptly, I wonder how they can ever possibly get over that.

Without wanting to sound like too much of a dick (although it’s probably too late for that now), the last ten months have basically made me a malfunctioning empathy machine and I’m in serious danger of becoming well-rounded.

And here are some other things I’ve noticed…

I am now my dad (or, actually, his dad)
If the question is “when do you become like your parents?” the answer is “probably about a month ago”. That’s when I officially threw in the towel on having it all and accepted the truth, which is that I can’t physically handle having more than four friends, I just want to wear cardigans and eat biscuits, and Friday nights are for staying in. Actually, my parents are far edgier on every count, so perhaps I’ve skipped a generation.

They’re not babies for very long at all
I started noticing this a couple of months ago but thought it might just be a weird phase my lad was going through, but babies aren’t actually baby-babies for that long. Probably about four-six months, then they morph into very small adults with lots of opinions about everything.

Sometimes you might accidentally compete for your child’s affection a lot
Back in the early-fatherhood days when my mind was entirely rational, I decided that I’d quietly accept my duty as the third wheel, I’d embrace the bond mushrooming in front of me, and I’d be happy for my wife and son. I love them both with every fibre of my being, I’d remind myself – my skin is thick, I don’t need constant validation. And then I didn’t sleep for ten months. The cowhide began to show signs of wear and has now been sanded down to the point where you can actually see my organs pulsating and straining through it like it’s a wet Rizla. I’m tired and over-sensitive, as mentioned I’m a massive pussy. So now every time my son crawls to me with a giant smile on his face, as I whoosh him up to the sky and give him a kiss, I surreptitiously check out of the corner of my eye that my wife can see just how well we’re getting on and knows to up her game. I like to think of it as extremely competitive parenting. I’m like Holmes and she’s Moriarty. Only we sometimes shag, with the emphasis on “sometimes”.