There we are looking real casual, not shifty in any way… 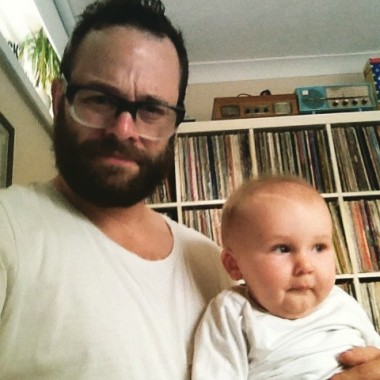 My lad turned eight months old the other day, which means that he has now spent one month less outside the womb than he did in it – eight months of his life has now been spent in what I like to call a “post-vag” state, whereas before he was pretty much totally “pre-vag”. He appears to be celebrating this not-really-a milestone by plundering through as many milestones as possible. He’s eight teeth in (one for each month?), he crawls everywhere, he’s only truly happy when he’s naked and kind of standing up (with props), he’s now done two upright wees – one against a chair in his bedroom and the other one against his parents in the lounge, next one will hopefully be in a urinal in a pub – and he constantly plays with himself in the bath.

It’s been another terrific month in so many ways as we sit back and watch him continue to morph from a baby into a little boy – then presumably into teenager then adult – but it’s also been the month that found me rabbit punched in the dick by Mr Reality. The reality of never really having a full night’s sleep ever again, the reality that if you get a little bit poorly it will take you three weeks to get better not two days. The reality that a home with one extra person and one less pay packet can pile a weight on your shoulders like a breezeblock. I’ve sweated from malady, I’ve sweated from stress, I’ve sweated from glancing at my bank balance then half-choking on sick, I’ve sweated because my office is too hot. But then I sit back in a beanbag with a cup of tea watching my little family playing together, and honestly who gives a fuck? We’ll get by because we’re already getting by.

And to go with that nugget, here’s a small handful of other new discoveries from being a dad for eight whole months and thinking I know everything…

You have to do a shitload of small talk
I’ve been in small talk situations, I’ve been to work do’s and dinner parties, I’ve met new people more times than I can even remember, and at least eight times out of ten they’ve gone away feeling massively underwhelmed – they wanted great banter, I recited my CV while they frantically scanned the room for better options, I could get an A Level in “standing there with one other person and not a single lucid thought in my head”. And now I’ve realized that small talk situations are basically part of being a dad, they’re a staple of my daily life, especially if I’m going to insist on doing things like “leaving the house” or “going on a bus” or basically being anywhere in the world where you might find many many “old ladies”. Old ladies are the worst, they want to know everything – his age, his name, his goals, his aspirations, his dietary needs, his sleep patterns, his feelings about Jeremy Corbyn, his favourite movies, his least favourite movies, why I don’t let him watch movies, and, often as a final face smash just as they get up to leave the bus, his gender.

You have to go to child-friendly pubs for the rest of your life
Pre-fatherhood the child-friendly pub was a Hieronymus Bosch vision of hell, but in some kind of weird life twist, these places have become my port in a storm. I go there to drink three pints on a Saturday afternoon as if it’s the ultimate gesture of youthful defiance and revolt, as if I’m somehow kicking fate in the knee and elbowing convention in the nutsack – as if I’m holding two fingers up at the maelstrom, falling to my knees and shouting to the heavens that they can not and will not defeat me. But the truth is that I’m basically just a man having a pint. In a pub. Granted this simple act has required my ears becoming desensitized to the piercing shriek of a thousand infuriated toddlers, but now that I’m really in the zone, I’m drawn to these sanctuaries like a sailor to a singing mermaid with massive norks.

This is literally going to go on for basically ever
Already in the space of just eight post-vag months I’ve seen my boy go from being like a little mole made of jelly, peering up at things and making no sense of anything, to him sitting up in his cot and essentially shouting for us to come and see him. I know that in a few months he’ll be saying actual words and at some point I’ll be in a room and he’ll just walk in with his hands in his pockets like it’s no big deal. At some stage he’ll want money for sweets, one day he’s going to trip on some pavement and try to style it out because there are girls walking towards him, his voice will break, he might join a street dance crew and rechristen himself “Blaze” despite me insisting that he NEVER joins a street dance crew and we have a “no ghetto monikers in the house” rule. He’s here forever and I’m going to see it all happen. That’s fucking weird. Slash absolutely wicked.