I’ve been a dad for seven months, here’s what I know… 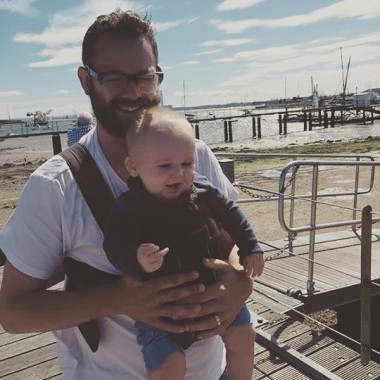 Many years ago fate somehow contrived to lead me down a precarious road and now I write for a living, which, as a means of earning money goes, is almost impossible to explain to people with proper jobs. It means that I am eternally expendable, if what’s coming out of my brain and onto a keyboard doesn’t float anyone’s boat or match their expectations, or if they think they can do better themselves, I’m fucked. If I stop having ideas for things to write, if I run out of different ways to say things, if I don’t bombard people week after week, if I’m not available around the clock, money quickly vanishes. It’s tenuous and at least once a month I vow to jack it in and attempt a more structured way of getting a crust, at which point my wife generally (and quite rightly) suggests that I’d be sod all use at anything else. So I stick with it, knowing that I will never truly get a day off or genuinely enjoy a holiday because the frightened mouse that lives in my brain will always be fidgeting – he won’t let me have time off, not under any circumstances. Not EVER.

Then earlier this month my wife started barfing for Britain while I was on three deadlines, and I had to play mum AND dad as they all came and went and I wondered if we’d all end up in care.

(I was going to go into deeper detail on the fallout from this, but Stuart Heritage has already covered it brilliantly in his Guardian column. Read that instead)

“Can I really take a day off sick because YOU’RE sick?” I asked, as my wife writhed around in absolute agony, groaning something along the lines of “yes definitely”, and long and short of it, I had a pretty groovy day. This whole experience really is one lesson learned after the next, so if you’ll bear with me here’s another small list of observations from MONTH SEVEN…

You sort of get used to their constant evolution – it’s only been seven months, but I’m now like a cocksure CEO when it comes to this parenting lark, strutting around the office taking it all in my stride like it’s no big deal. Checking my watch and biting into a nectarine while another tooth comes through, texting someone while he threatens to crawl for the first time, half-watching TV while he formulates what might turn out to be his opening gambit. It’s not like I care any less, it’s just that if you suddenly leapt up and grabbed a film camera every time a prospective milestone arose you’d be a fucking train wreck. I think maybe I’m just getting more comfortable with being a father? Yeah let’s go with that.

Babies will eat pretty much anything – my abiding memory of childhood meal-times is one of constant disappointment. I’d want sausages or chocolate, but instead I’d be perpetually confronted by something as challenging and grotesque as broccoli or cabbage, or carrots or cauliflower or any number of other “vegetables” that my mum would darken my afternoon with. Babies, I concluded, must be very picky people because those horrible things all turned out to be super-tasty and jumbo-good-for-you so more fool me. Not my guy though! – he’d actually eat not just the vegetables, but the plate and his cutlery too. He’d even have a bash at eating his own highchair starting from the top. He’s pretty fat.

Your relationship requires the Three Cs – that’s COMMUNICATION COMMUNICATION COMMUNICATION (plus possibly some CONDOMS). I’m not going to dwell on this because no one wants to get bogged down with the intricacies of another man’s relationship with his lady, but put it this way – modern parenting is a team effort yet most of the work you do is alone, so you should always go massively over-the-top with your compliments so that neither of you feel unappreciated. Tell him his beard makes him look like Brad Pitt or that his growing belly looks absolutely gorgeous in the moonlight. Or if it’s you to her, perhaps politely compliment her nice tits.

It gets better and better – I know I always end these pieces with an overly sincere bit that sounds contrived but it’s true, it is getting better and better and better. His hair has changed from brown to ginger, now he’s experimenting with blonde and before long he’ll probably have a go at some frosted tips, my boy is becoming more of a person with more of a presence and we feel more and more like a real family like the ones you get on telly or in films.