I’ve been a dad for almost six months, here’s what I know… 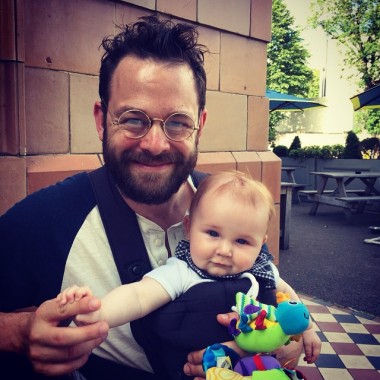 So I was sitting there at 6am thinking about life and fatherhood and dazzling myself with my own insights, when it hit me – like a rock in the face or a fist in the face or a spade in the face or a bullet in the nuts or an open hand slap in the face or a shell toe in the dick or a plank in the face – the more we learn to vocalize our feelings, this amazing thought began, the less able we are to actually do so. OMG that felt so deep! Remember it was 6am, I felt like Socrates – the philosopher not the footballer, although either would be fine – it’s precisely the kind of profound sentence he’d say, only he’d be looking out to the desert wearing a flowing toga, I was in my underpants holding a baby and half-watching a cartoon about a tugboat talking to a lighthouse.

I looked lovingly down at the fruit of my loins, he looked at me and I decided that in that moment our love was purer and more honest and tangible than it will ever be in our entire lives despite him only being six months old and about the size of a small dog or a massive hamster. I took a self-congratulatory glug of water and wondered if 39 years ago perhaps my dad was looking at me with a similarly dewy gaze, perhaps he too showered me with kisses from a well of fatherly affection that was bound to dry up once we reached matching eye level?

I wondered if there’s some kind of great hidden irony about babies, whether babies are just more succinct and honest with their feelings – perhaps they’re fully formed already? Perhaps we’re born perfect then ruined by humanization? Hang on, I wondered, is my boy actually teaching ME without me realising? My deep quizzing of absolutely everything I stood for was cut short as my son’s arm shot up to my face grabbing a fistful of my beard in a Vulcan death grip, his eyes begging me, telling me, to shut the fuck up and feed him. He’s so cute like that, we’re great together. I think he might be a Scientologist. Anyway I went back to brainlessly stroking his face and everything was cool. Here are some of my less indulgent insights from the last few weeks…

In hindsight the early bits were totally petrifying – like when people are blinded by adrenaline during a traumatic event, I’ve realized that the first few weeks, possibly the first couple of months, of parenthood were like being held hostage by a tiny little madman. We didn’t know what we were doing, we just knew that he wanted food NOW, he wanted to sleep NOW, and we weren’t allowed to go anywhere because he was basically blind, deaf and emotionally unpredictable. He was also losing weight and he barely ever shat and we were wrecks overflowing with a sudden onslaught of unconditional love. Now he’s fat as a potato, he makes gross noises from every orifice, he grabs whatever’s in his eye line and treats it with inappropriate levels of euphoria or disdain. I’ve honestly never been more comfortable with another person. I’d say that realistically it gets to be actual fun around MONTH THREE. I know that now.

Your boys’ shit isn’t as gross as everyone else’s – it’s strange, in the same way you can sit in a locked glass box joyfully intoxicated by the smell of a million of your own farts but then become massively offended if one from a stranger surfs fleetingly past your nostrils on a windy day, your children’s huge yellow shits are far less grotesque than other peoples’. Isn’t human biology constantly fascinating?

You don’t actually need that much sleep – for years I considered myself to be an 8-10 hours/night kind of guy, but it turns out I’ve been massively wasting my time. As it happens I can spring out of bed after just six hours and plough into the day like no one’s business. Things tend to get a bit hazy and surreal around 3pm for a bit, I might come-to sitting on the work bogs a couple of times, or watch as my brain floats out of the window, but apart from that I’m laughing. In many ways I’m now lamenting all of those wasted hours – I could have achieved so much more with my life!

I could now probably, on some level, communicate with most foreign people – for six months I’ve managed to accurately predict what a gorgeous babbling baby wants on a daily basis, I’ve made him laugh, I’ve made him cry, a couple of times I’ve inadvertently made him puke up his lunch. In a very general way he seems to have enjoyed himself. I think this officially makes me a “people person”.