I’ve been a dad for almost five months, here’s what I know… 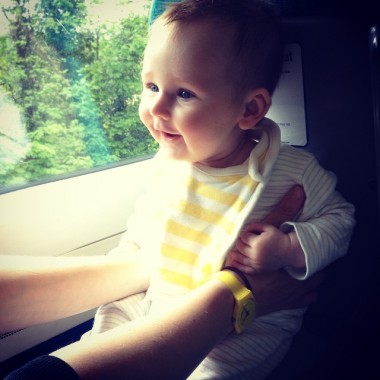 When you’re younger there’s always some kid at school who casually grows a beard every weekend like he’s a middle aged ad exec even though he’s nine. After football he’s the one slapping generous handfuls of Radox into his chest hair while you dash in and out of the showers, allowing just enough time to stop being muddy but not enough to reflect on the nagging worry of ongoing pubelessness. But over time you all catch up, you forget that you were ever porcelain smooth and Mr Chest Rug joins the ranks of being like everyone else – just another 14 year old dude with a full Tom Selleck moustache attempting to snog some chicks. Anyway, I’m not sure where this is going except to say that I think I might be that guy’s dad – my lad has two entire teeth already and he’s less than five months old (apparently that’s ridiculously early!) so I’m stocking up on Radox and a Fisher Price shaving set just in case.

Babies are like ninjas
It’s impossible to be entirely aware of your baby’s movements at all times, so for the most part we rely on instinct, intuition, guesswork, and things that are essentially straight jackets, cages or those beds that mad people get buckled into to stop them from harming themselves. Even so, what generally happens these days is that I’ll look in the other direction for 0.3 seconds and he’ll put an entire limb in his mouth, or I’ll sneeze while he’s on his play mat and he’ll spin over four times and end up somehow holding himself in a Half-Nelson. I’m genuinely convinced that every time I blink he rearranges the house.

Sex is just silly
Realistically by the time you have a child you haven’t had normal filthy sex for the best part of a year and a half. You’ve done “trying for a baby” which you carried out with workmanlike precision based on the positioning of The Moon, you had self-conscious pregnant sex that no one can get too carried away with for fear of being labeled a fetishist. Then you watched in awe as the cherished entrance for your penis became the wondrous exit for your baby and suddenly the whole frivolity of the thing seems a bit silly and ridiculous. The over-elaborate roleplay (“Okay I’m a cop… you’re also a cop. We’re partners but we hate each other”), the safe words, the saxophone soundtrack, the pointy nips and beads of sweat swimming in pools of light from a streetlamp outside, it’s just such a hard sell when all you have is a 6-minute window on a Tuesday evening. Probably better to wait eighteen years then start swinging.

Living in the moment is probably a good idea
We seem to spend our time forever lamenting the stages our boy has passed, or looking forward to the ones that are coming. My wife made me laugh until my stomach ached when she said she was most looking forward to him going to karate and seeing him “really in the moment” in the dojo – she’s so weird! – but it’s the old cliché about them growing up so fast that really rings true, he’s constantly evolving at a ridiculous rate and all too often I’ll look at him and wonder how he got so big all of a sudden. I’ve started using meditative breathing to focus on the present and enjoy what a beautiful bundle he is today. Which he is, by the way.

They don’t get boring, even though fundamentally they are exceptionally boring
I always wondered how people coped with the day-to-day monotony of having a baby, and here we are five months in and our guy hasn’t once stood up, he hasn’t said anything of much merit, not a single actual word in fact. He has no bother for our schedule and what we want to do, pretty regularly he’ll decide to shit himself while smiling at me as if goading me with his uselessness, yet I couldn’t be further away from getting bored or tired of it, if anything he hooks me in more every day. He sometimes makes familiar noises like he’s saying HELLO. That bit’s promising.