I’ve been a dad for nearly two months now, here’s what I know…

They sure love getting pampered… 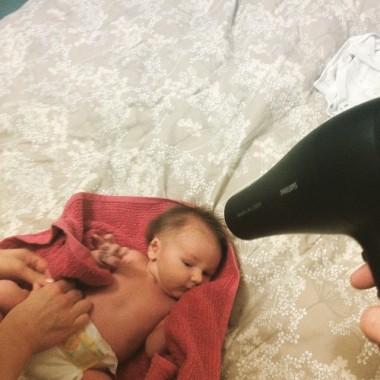 I thought I’d reached my lowest ebb last Saturday morning as I loudly barfed into the toilet while my wife showed potential buyers around our flat. The estate agent reckons it sells itself, so in some kind of twisted mockery this could have been fate’s way of testing out that theory. But anyway, I was wrong, my actual lowest ebb came about five hours later when the viewings had stopped. I was sitting on the sofa with my six-week-old son sprawled across my lap being shakily stabilised by my weakened arms when I started weeping because I felt so ill and a tear fell from my eye and onto his sleeping face. To reiterate – his father’s tear. Fell on his face. It painted such a sombre mental image that I’m not sure I’ll ever get over it, nor am I sure that he’ll ever bounce back from this either. It was devastating, it cut us both deep, and yet I’d spent the day throwing up, I’d unwittingly shat myself twice, I was crying and groaning incoherently – we’d never had more in common. Anyway, I’m a massive dad-bore now, and if you’ll indulge me here are a few other priceless insights from the first month and a half of having a tiny beautiful intruder in my pukey-smelling flat…

Baby arses absolutely stink – For the last nine months or so I’d been convinced that I’d be shoulder-deep in baby shit for the rest of my life. And yet my lad only does a moderate two or three/week and leaves it at that. Apparently lots of newborn babies do this and frankly it’s very polite of them. Less polite are the every-15-minutes bus journeys to Fart Town, Mississippi, where the smells are indescribable.

A sink makes for a good bath – The apple-cheeked brigade may splash out on Fisher Price Jacuzzis, but actually all you really need is a kitchen sink. This discovery was made one evening when my wife looked at the sleeping child, then looked inquisitively at the sink and then cocked an eyebrow. Three minutes later she was splashing our boy in a washing up bowl, and I was howling insanely while chucking a baby bath off the balcony.

These guys can just live in rags – THEY DON’T KNOW! – There are many wonderful simplicities about babies and the one I like the most is their total lack of self-awareness. It’s the trait that allows them to essentially shout at you for not giving them food, or for daring to not be awake at the same time as them. But it’s also the trait that means you can just roll them up in a flannel and call it an outfit with zero backchat.

As a man you’re not ENTIRELY useless, but seriously, you kind of are – I wasn’t aware of it but breastfeeding is a full time job, so my role has become that of the gormless cheerleader shouting GO TEAM at 4am when it’s just us up with the owls. Even so, my life is a lazy float down the Nile in comparison to getting your nips gnarled to ribbons for a cup of milk.

People, generally, are much nicer to you – The arrival of my little bundle of joy has seemingly stamped my card as a full time member of the Niceness Club, a place where everyone is really nice to each other and that’s lovely because being nice is, you know, nice. I love it, we all have tea and smile at each other, because it’s statistically impossible to be unhappy or cynical when there’s a baby in the room.

You become a ball of pure emotion, you talk in silly accents, you make up silly songs, you only have two drinks and that’s a BIG NIGHT OUT, you write things like this on your “BLOG” – I was a normal guy once, I remember how it was – I wore jeans, there were people talking about their children, me wondering how they could possibly enjoy not getting trollied and having a great time at the weekend. Now I literally sprint home from work just to stare lovingly at my son for a few hours, or to talk to him in a cod Italian accent (which my wife eventually asked me to please stop doing), or I make up stupid songs, or I pretend he’s really into Motown records so I can buy more Motown records. Big nights out start at 4pm on a Saturday afternoon, they involve two pints and being home by 7pm, I’ve never cried more in a two month period without being gripped by an existential crisis. I look at pictures of him while I’m at work and become more determined to succeed, I’ve started writing paragraphs like this one. I’ve genuinely never been happier.

With the exception of the day I spent spewing my guts out. Stupid prawns, man. So SHELLFISH!