I’m about to be a dad for the second time, here’s some words!

There they are, on their first big train journey 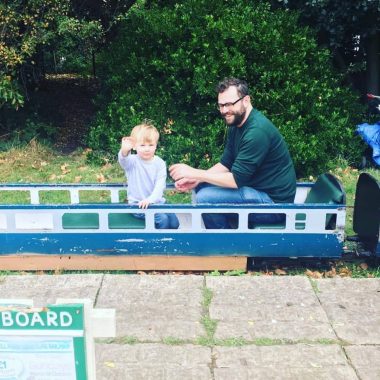 There have been meaningful words uttered, bellowed and shrieked by my son that have made me laugh, or made him seem momentarily sweet, or made him look ridiculous, but the ones that choked me up – more than the various incarnations of “I love you daddy” which have been entirely crowbarred onto him – came recently, when he said “what’s your favourite animal Dad? A polar bear or somefin?”.

I found it funny that he’d decided I probably like polar bears, that I look like a polar bear guy, but the reasons it made me choke back the tears were twofold. Firstly, because he’d woken me up to enquire about wildlife at 4.30 in the morning and I was already fucking tired from the previous thousand nights when he’d woken me up early. But also because it was the first time he’d ever asked me something about ME. Over two and half years into my lifetime’s work – “Project Parent” – and the little person I have adored and cherished like no other unexpectedly stumbled into an empathetic moment that made my heart inflate like a helium balloon. For a faint glimmer of time I was flattered, it was like I somehow even mattered (a poem!).

That’s not to say I’ve been totally selfless as a father, that I’ve focused solely on my family and their needs, disregarding my own interests along the way. I’m not Joan of Arc. In fact, I’ve spent much of my son’s infancy attempting to swamp him with all of the things I love, to inundate him with cultural touchpoints that will one day bring us closer together, and make us not just close relatives, but also BFFs. I play him my favourite records. When he demands another Peppa Pig, I stroke my chin and attempt to steer him in the direction of something arch and vintage like Top Cat or Charlie Brown – I have every episode of The Monkees on hand for when he’s older.

You might even say that, like probably all parents in the history of time, I’m projecting a rose-tinted version of my own childhood onto him. I’m weaving and reworking my early years into his life, living vicariously again through him. Only problem, he isn’t me. He’s entirely his own man. He got bored watching Charlie Brown’s Christmas (understandably, it’s fucking dull), he wasn’t wowed by my 80s superhero comics in the way I’d expected. At the time of writing, 90 per cent of my suggestions are met with a loud and defiant NO. He even likes cauliflower, which until deep into my 20s was the food of the devil himself.

And now, I have another life to clumsily attempt to influence, because my son, the apple of my eye, is roughly a week away from becoming a big brother (or sister, should he ever want to pursue that route). Yes, my penis has once again combined with a vagina to create life, the semen shooting triumphantly from the small hole at the top of my dick, before swimming like the holy clappers to form a symbiotic union with one of my wife’s eggs. From there a microscopic person has been formed, which was first the size of a grain of sand, then a grain of rice, then a grain of malt, then it took on the form of canapes, like being the size of an olive, then a wotsit, then a square of manchego cheese on a toothpick, then a small gherkin, then a bigger gherkin, then a slice of watermelon, then a whole charcuterie platter. It’s now the size of a baby, and its head is literally inches away from one of my preferred orifices. It’s an exciting time.

The conveyor belt has been wheeled back into the factory, and will be chugging with mustardy nappies and miniature outfits all over again. Only now we’ll have a running commentary on events from an opinionated toddler who uttered barely anything for two years and now can’t stop. There will be a little less simmering anxiety in the air than last time, but a lot more noise coming from the room next door. We’re ready, we know how it goes now. We’re professional parents. We know that they remain just a fraction above inanimate for months, that they hardly move, and that little cuddles are practically on tap. We know that you promise yourself you’ll be an excellent, attentive parent, before coming a cropper and sitting them in front of Milkshake or CBeebies or Ker-razy Kidzz Toon-Times! (made that one up) for hours on end. We know that children, like their parents, don’t always know what the right thing to do is, and that really, in essence, we’re a team all as clueless as one another.

We also know that when they finally come to grips with the notion of singular thought, and their growing minds begin to grasp the vaguest molecule of information about the infinite expanse of opinion in the world, somehow cobbling together the possibility that we’re all different, and that no two people can be guaranteed to feel the same way about ANYTHING. When they look at you and see not a mirror reflection of themselves, but someone wholly alien, exciting and unfathomable, and out of the window a world of curiosity and opportunity. When they finally, after literally years of waiting, ask you a question from an intrigued and beautiful, developing mind like “What’s your favourite animal Dad? A polar bear or somefin?”, we know that the correct answer is “what? I don’t know. Go back to bed”.

You can always overanalyse and weep about their perceived genius later.