There’s yer man on the right 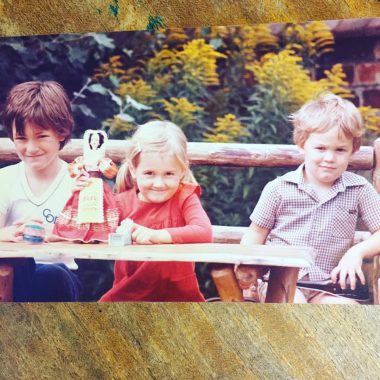 When I turned 4 in 1980, my dad was 32, my mum was 30, and Start! by The Jam had just replaced Ashes to Ashes by David Bowie at the top of the charts. I was their third child (third of three, later to become third of four) so your rudimentary calculator will tell you that when I was born my dad was 28 and my mum was 26.

My brother (the eldest) had already been around, moving and shaking and making important business deals, for nearly five years when I came along, and my sister was 18 months old or so, so on paper, my parents had basically finished school, taken a single solitary deep breath, and started making babies. Just going at it hammer and tongs to get these things out. My dad was literally a university student with kids.

That means in the days when he should have been drinking snakebite, fashioning makeshift bongs from coke bottles, and blushing around hot girls, he was dragging three little turds (great Bob Marley track) around National Trust buildings. Equally, in a parallel universe somewhere my mum was probably a ballerina or playing professional snooker, not dragging the same three little turds (again, copywrite Bob Marley) reluctantly to Catholic mass.

We went to campsites, we visited swimming pools, we ate sausages, we all mispronounced barth as bath because from 1978-1984 we lived in Merseyside (we later moved back south and quickly corrected ourselves), and all the while my parents seemed like two adults who were in charge, and definitely knew what they were doing. They didn’t bow to our childish demands by taking us to chocolate factories or rooms made mostly of foam, and they didn’t indulgently inflict whatever their notion of what cool pop culture was on us by molding us into hip young gunslingers before we even knew what the world looked like either.

They were serious and they ran things like a well-oiled machine, drip feeding us information on a need-to-know basis, and we were small children slowly getting some sense of how things worked – everyone had a role. Fast forward to now, and I’m the daddy (well, I’m a daddy). When my son turns 4, I’ll be 42 – ten years older than my dad was. When my daughter gets to that point, I’ll be 45 (put down the calculator, there’s no need). Should I ever have a third (which I won’t) I’ll be fucking ancient. And I definitely won’t ever have a fourth either, because if I get to three I promise you I will rip my own testicles off and post a picture on Instagram of me holding them in a clenched fist while I scream.

I suppose the point of all this is that my parents were ridiculously young when they had kids and I left it quite late. Yet while their generation was forced to grow up and create order, mine has somehow stayed childlike. I still demand regular trips to the pub with my mates, I inflict all of my stupid pop culture bullshit on my son (we now read my old Spiderman comics together at bedtime) and while my parents selflessly restructured their entire lives to bring up children as best they could, my kids have become an accessory in mine, fitting neatly into the world I’d already made for myself. Will they look back on this time and see me as the responsible adult I’m definitely not? Or will they see through the veneer to the manchild I am?

Who the fuck knows?

All I can say with any confidence is that the best track in the charts the week that I turned 4 in 1980 was Dynamite by Stacy Lattisaw. Criminally languishing at Number 51.