Including many pairs of this guy 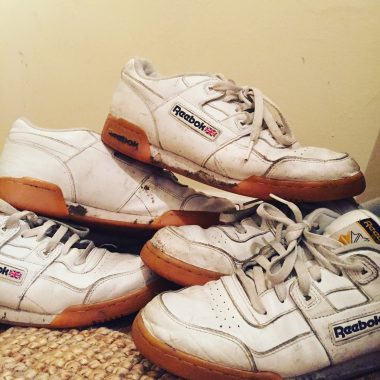 You never forget the great shoes that meant a lot to you, so with that in mind, I put on a helmet and took a stroll down a road I like to call Memory Lane. I made that name up.

My favourite ever Reeboks that I basically buy every year – at number one on the list is the same pair of shoes that I have been forking out for on loop for a decade, but I don’t know what they’re called. Let me describe them to you – there’s a heel bit where you put the back of your foot, then a bit at the front for your toes, and they’ve got these laces that you can get someone to tie for you or do yourself. Whatever floats your boat, and erects your penis/willy. The main image is them.

Nike Air Force One High Tops With a Denim Swooshy Bit – I’ve seen Nike Air Force Ones come and go, and over the years I’ve even worn a few of them, pulled them onto my feet, walked around a bit, but none have ever made me feel as good as those first ones, you know, they meant everything to me. They were my world, and my world’s world, and I wore them religiously every day until they started to smell like someone just burped a bag of quavers into your nose. Then I chucked them up in the air to dangle off some phone cables.

Reebok Classics with a GOLD bit where the logo normally goes – when I started out at university, green around the gills, basically a virgin although I’d had full penetrative sex once before and I’d done an awful job of it. Back then, I just needed something to put me on the map, to arrive me into a room and say “hey room, look who just walked in, it’s me with the shoes”. And what’s classier than Reebok Classics with gold on them? (NB. lots of chavs just came then fainted, or fainted then came, or came-fainted)

Red Converse Baseball Boots – when I was a 13-year-old schoolgirl/boy, I wanted for just two things: 1. a really hairy manbush full of pubes so glossy and generous that I could stride into any shower in the world wearing a medallion and no one would laugh at me or attempt to punch me in the solar plexus, and 2. some Red Converse All Star Baseball Boots, ankle high. Both wishes eventually came true, but my third wish to be able to bend forks using just my dick unfortunately did not.

Black Suede Clarks Desert Boots – the great irony of desert boots is that no one would ever wear these in the desert. In the desert you’d wear flip flops or espadrilles, or you might not even wear shoes at all, you might be completely naked. But look, we’re not here to discuss semantics, this isn’t “top ten semantics I want to discuss”, it’s shoes. These are shoes, good ones too. Even though they got soaking wet and never fully recovered.

Timberland Boots, but not the ones you’re thinking of – no, these are the Timberland boots that I’M thinking of. Not the beige ones, but brown ones, deep rich mahogany brown, brown as ale or the night, or a stick. And made of leather, sweet Lady Leather with her silken touch and her leathery old grotesque witchy face and her weird boobs and her, somehow, saggy armpits. The downside is that it takes me three hours to put these on, the upside is that they make me feel important.

Dunlop Green Flash – once derided as the kind of trainers tramps would wear, it was a slow process, but these eventually gained full entry into civilised society. Sure, once in a while you’d see a battered old pair on a guy doing a poo in a doorway, and sure, he’d look at you and shout DON’T LOOK AT ME before laughing insanely with his baked bean teeth, and sure, I’ve started saying sure a lot recently, but then, like an hour later, you’d see them on a hipster guy with Bjorn Borg hair and you’d do the maths (1+1-1+4 = FRESH).

New Balance but ages before any of you had them, making me even cooler than we already thought, and we were already concerned that I was emitting too much super-hipness on the jumbo-cool-o-metre – but, of course, I wouldn’t buy these now, because you like them (and so you should, because they’re amazing). But they’re not amazing. But they are.

These suede slip on atrocities from an insultingly cheap shoe shop in Hammersmith – I thought I’d stumbled across the Holy Grail of shoe shops, but only if the tale of King Arthur ends with him finding a plastic goblet that a baron might have been using to wee in at night (there was no electricity in those days, and the toilet was three hours away on horse). These were about £7, so you could buy them in bulk, they were really comfy, and thinking about it, absolutely hideous.