Where have all the good men gone? 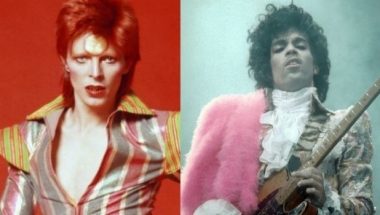 George Michael is dead, Bowie is dead, Prince is dead, Cohen is dead, and soon Trump will be the most powerful man in the world.  It’s the rise and rise of the tough guy, of toxic bravado and the death of men that showed us different ways for boys to be boys.

I see it every day at work, in my dating life, every time I watch a new box set, and I am so over it. The portrayal of “strong men” in the media is making unreasonable behaviour acceptable.  You would think chest beating, assertive domineering manliness was only taking place in rural tribes in Africa. But sadly, much like the “mom” jean, it’s already made a big comeback and neither of these things suit me.

I’m talking about you Ray Donovan, Tony Soprano, Hank Californication, Billy Goliath. The main characters in these shows are essentially the same guy. The controlled variables of a furrowed brow, anger issues, drink problem (always bourbon) in dark bars, or at home from a crystal glass (always a crystal glass). But man he loves his kids right? He would do anything for them. He is exonerated.

Yes he whores around with prostitutes and cheats, but man he really does love his wife/ex wife deep down.  He’s just so loveably messed up.  She takes him back, how can she resist, he’s such a sexy fuck up!

And okay he doesn’t have a job, but he was great in his day and then he messed up real bad and is through with apologising O.K!  Cue a string of hot model types just throwing themselves at Mr Messy as they try to figure him out and straighten him up.  He goes back to his wife and kids who he really really loves remember? He kisses them on the head (always on the head) and makes them pancakes.  What a man.

Let’s cut to the adverts.  Here is Johnny Depp wheel spinning around the desert digging holes, swigging booze, smoking fags and reciting words he found in Kerourac’s junk drawer. Here is the man that evidence has shown beat his wife but his career hasn’t suffered at all. Because guess what? The tough guy is being paid millions to sell stuff. This mad man and his wild ways is DESIRABLE!?!

Is any of this desirable or is it in fact glamourising abuse and stamping on equality?  White tough guys and bullies get all the gold in the end. That shouldn’t be the story.  But it’s the fucking story.

In my real life I hear tons of people having shocking encounters and we just laugh it off.  Just last week a D list celebrity groped my bum when I was backstage at a gig. Now what possible outcome did he expect from that? Me to lift up my skirt like Betty Boop and squeal “take me now you swine!”

Next I was having breakfast at a posh restaurant in L.A. In walks Ryan Gosling, we get in to conversation on things to do in the city. He asks for my number so he can send me some ideas. I realise it is not Ryan Gosling.

He asks if I am up for an adventure today, “sure” I say “like what?” Well why don’t we get a hotel room and just enjoy each other he says. He paused and raised his eyebrow. The kind of pause you get between a far-fetched story and the inevitable questioning that would make this unreasonable.

I proceed to rip him a new asshole. I mean everyone gets name checked from his mother, to Hillary Clinton and possibly Mary J Blige. He takes this as some sort of flirtation, that “Hell no” means yes yes etc.  He starts on as though on a game show quickly and excitedly reeling off his qualities that might get him the Caribbean holiday/ afternoon delight in a motel.

One!  – Listen O.K. I give an incredible massage, let me show you, give me your arm

Three  – I’m a good guy, I own a real estate company

Four – I think you are so sexy, your tits are just so…small and your lips are just so …small …and your hair is so unkempt so …natural it’s driving me crazy

People are being assholes and getting away with it and better still getting to the top by grabbing pussy and boasting about it. Are we doing enough to stand up to it or do we somehow still think it’s acceptable?

We need more Bowies and Princes, because who is bringing up the next generation of boys? Beiber, Kanye? Somebody better get Dylan some of that vampire blood and start wheeling him around the worlds schools.

We need humans that are consistently compassionate.

Men with big hearts and arms.

More eye shadow and heels for the guys

What is it to be a man? isn’t it just a good Hu-MAN, a good partner? I am lucky enough to have many friends who have found truly good men to share their life with and there is nothing sexier than these guys.  They are good husbands, fathers, funny, caring straight up MEN.

Let’s celebrate and praise these ones.  The ones that say:

‘Cause we believe in you, Soon you’ll grow so take a chance with a couple of Kooks. Hung up on romancing” – David Bowie giving great parenting advice.

“I think it’s amazing the way that love can you set you free, I think you’re amazing”- George Michael

“Built like she was she had the nerve to ask me if I planned to do her any harm” – Prince saying what we should all be asking and always being a supporter of strong women.

Now we can all agree that Prince was not shy in his lyrics when it came to the old sexualising.  But he would defo buy you a few chardonnays before trying to give you an arm massage. Goes without saying he also cut through all the constant questioning of his gender identity, race and sexual orientation.

I’m going to tell you about a recipe now, because you need to teach your sons to bake cakes.  This is not the 1930s, although it looks a lot like it, and I don’t think we need to go to the extremes of having another world war so that we can self-correct and sort the men from the boys.

This fruity Meringue Roulade is, in a way, like the perfect man. Light, squishy on the inside, sort of hard on the outside with lots of cracks and imperfections. Some broken nuts, cheap and with a bit of effort, whipping and sugar will be a real crowd pleaser.

Put on a feather boa, be kind and just don’t be a dick and you will be the strongest man in town.

I dedicate this recipe to all my favourite men

Ingredients available at your corner shop.

zest of an orange or half a tsp of orange extract

Line a swiss roll tin with greaseproof paper, or a turkey tin, whatever you have

For about two minutes

Now add the caster sugar in spoonfuls and carry on whisking

You want the mixture to stand up straight in a peak like a ku klux klan hat when you take the whisk out.

Add in the vanilla essence, cornflour, vinegar, cocoa powder.  You need to fold these in which means gently stirring Think of the action you would do if miming eating soup with a spoon over and over.  Do that.

Empty on to the paper in the tin and GENTLY spread out not all the ways to the corners.  Don’t try and flatten it too much you want to have a nice rectangle.

Bake for 30 mins or less if its ready.  Just look it it a bit cracked does it feel still a bit soft? It’s ready.

Lay out another rectangle of greaseproof paper bigger than the tin on top of the baked meringue and flip it over. So now you have the meringue sandwiched in-between the papers.

Gently peel off the paper.

It’s ready for your filling

In a bowl mix together the mascarpone, icing sugar, orange and then the double cream.  Now whisk by hand for about 4 mins or a min on the electric no longer just until its thick be careful as you can curdle and it looks like scrambled eggs.  This is not the desired outcome.

Now then get your paper at the edge and roll it up and help it guide you to roll the meringue over.  You don’t need it tight like a spring roll more like a lazy sausage roll so it has folded over its self

I piped the rest of the cream on top but you can just plop it on and pop some whole hazelnuts across the top.

Next step is optional

Pour about 100 ml of cream in to a saucepan and bring to a gentle boil then take straight off the heat and pour over about half a big bar of dark chocolate born up small.  Stir together until melted.  Thats chocolate sauce innit!

I drizzled this across the top.  Actually less of a light drizzle more like a jackson pollock painting.  Go mad with this.  I dipped a spoon or maybe a fork in the choice sauce and lashed it over the roulade it was tremendous fun and I couldn’t stop.

Slip the roulade on its paper back on a tray and put in the fridge until you are ready to serve it.  When ready dust some icing sugar over the top. Maybe some extra orange pieces on the top too.