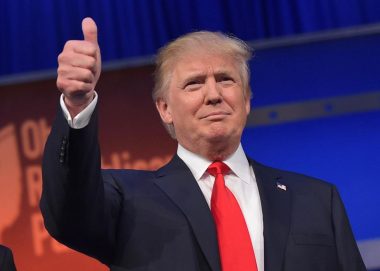 Ever since he came to power everyone’s been all “Trump who?” so the Interestment team has been busy rooting around for info on this guy. Thanks to my fellow reporters Matt, Rory, Craig, Steph, LotMill, Nick, and Tom for some of their sterling work.

He played Zeus in the school nativity play

He was born Balzac Trumpowitz

He does an awful Christopher Walken impression

His dream double bill is Commando followed by Commando again

He once put his hand up in class and forgot why

He’s not 100 per cent sure how to say “croissant” so he orders one of those stupid French breakfast cakes, you know the swirly ones, taste like butter. Fucking lovely

His favourite members of One Direction, in order, are: Harry, Bruce, Rakim, Sheldon, then Dickon (sorry Dickon!)

He was born Ezekiel Trumpington

He once shot a man full in the face with a gun, and that man was an abstract notion called Hope and the gun was something also metaphorical

But he may not have

No one knows (we know)

His signature dish is “rice, two thousand and four ways”

He’s a boob AND a leg man, and also likes vaginas and the bottom area and the tits. Hang on, sorry, we’d already said tits, they’re the same as boobs

He once drove a sit down lawnmower. Just kidding, he never did that

He had a book idea, it was called Where’s Wally? and then he found out that already exists so he called his Where’s Polly? and gave the dork some huge great big titties

He was born Karl Webster

He sort of likes apples, they’re basically okay, if they’re there he’ll eat one

He keeps forgetting about the film Groundhog Day

He has never been to a PTA meeting

He doesn’t understand why nuns all dress like strippers

Every Christmas he mentions how he would “do” Miss Scarlett from Cluedo, and he then explains that “do” means to have sex with, in the study, with his meaty truncheon, even though there isn’t a meaty truncheon in Cluedo. Oh hang on, just got it (it’s his penis)

He’s like “musical theatre? Okay let’s try it out”

Chopping bacon gives him a lardon. Not really, that one’s a joke

He was born Leslie O’Donnaghy

He once tried to eat a lime like it was a satsuma, and considers it the biggest regret of his life

He has a recurring dream about his dick. It can talk and play golf

His karaoke song is anything by Bob Marley

He likes to stare at people when he blows his nose

He calls his mother by her full name

He once told a guy he had size 12 feet

He has no hair on the back of his neck

He sometimes creeps away to cry after a massive orgasm

His Halloween costume is Wet Handshake

When he’s nervous he imagines everyone on the toilet, then feels appalled

If he’s having a midnight snack, most likely it will be a massive ice cream in a cone

He was born Sally Anne Sallyannington

He once accidentally bought some jeggings but then thought, okay let’s rock this

If he wrote a Bond film he’d make the cat sitting on the baddie’s lap the real bad guy, that’s the twist

His French friend Jean-Pierre once introduced him to Fearn Cotton but he thought he was saying FUN COTTON. It was really fucking funny

He wears headphones during haircuts

He once heard a fax machine and thought it was R2D2

He gets really frightened in cinemas

He sometimes just wanders around eating a gigantic bowl of cereal

He likes to tell janitors to believe in themselves

He once said “that’s right sugar tits, papa’s a feminist”

He has a semi-erection in his graduation photo

His highest ever break in snooker is 0

He thinks his swimming pool is just a massive outdoor bath

His favourite time of day is 4pm

He screams during fireworks

He has barfed into toilets, down a wall, overboard on a yacht, and out of a moving lorry

He was born Donald Trump, that’s his actual name, not even kidding