A list of jokes and ideas that never made it 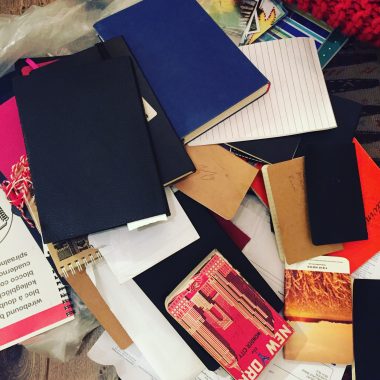 Like anyone with delusions way above their station, I’ve spent years jotting dreadful ideas into notepads, wondering if one day they might amount to something. Invariably they haven’t, so I thought I’d chuck a bunch of them away, but not before sifting through them for gold. These are the one-liners and vague ideas for sketches or scenes, or god knows what, that were occasionally just sitting there on a page surrounded by doodles. As you can imagine, it’s all very hit or miss (mainly miss) but I thought I’d immortalise these thoughts anyway. This is how they were on the page, scrawled but verbatim…

When you bump into someone on the way to meeting them do you still go to the meeting point together?

Sketch idea: bump into your girlfriend on the tube, you live with her but the change of environment throws you. What the hell do you talk about?

Jesus comes back, turns water into wine. Everyone’s offended because it’s not what they ordered

TV Show idea: set in the 80s, everyone taking heroin because they don’t know it’s bad for you yet

The News but each story starts with “apparently” or “I think”

A cookery show on the radio, just lots of groaning, and “ooh look at that”

A farmer who talks like an executive – “I need those cows dead by close of play!”

Pen pals – people you send beautiful letters to, then meet and have insanely dull conversations with

Controversial Blues singer who refuses to sing “woke up this morning”

If I see someone without a tatt I think “what’s wrong with this sociopath?”

I had to dump a girl for being too sarcastic, which obviously made me feel wonderful

Why do we ask tall people what the weather is like up there? Surely it’s exactly the same, just a bit colder

How many people have said “shit look at the size of that dog!” pointing at a horse?

Let’s play Name That Tune but with weird stuff

When someone says “I didn’t get the memo” I want to shout “BECAUSE THERE WASN’T ONE!”

When Northern people say “proper gravy”, does that mean what I think it means?

I feel sorry for tramps always having to camp

Not sure the Thrash Metal song I’m writing works. It’s called “I long to kiss you”

Final round of game show: The Snogathon

Guy on the tube, total silence, everyone avoiding eye contact. As soon as he gets off everyone starts chatting

Dying Man: “Tell Sarah I love her”. Other Man: “Don’t you mean LOVED? Because you will be dead when I tell her”

I’ve had a really lucky night, I started playing music literally minutes before the neighbour started banging on the wall, making a dreadful racket. Thank god for the music

On childhood: I was one of the first boys at school to develop breasts