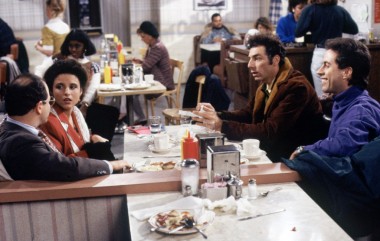 The other day a guy I used to vaguely know popped into my head because he always used to wear the same outfit – always, without fail. His chosen uniform was a light blue short sleeved shirt over a white t-shirt, dark blue Levis jeans, and I think Doc Marten shoes, and there was a rumour going round that if you went to his house all he had were thousands and thousands of records then a wardrobe full of regulation light blue short sleeved shirts, white t-shirts, Levis and Doc Marten shoes. That was him done, and frankly he looked great for it. Fashions changed with the wind but he always stayed the same and I respected it then and I still respect it now on the assumption that he’s stuck to his guns and not gone all swishy on us. Anyway the reason I thought about him was because I was thinking about Seinfeld and one of my neural pathways decided to take me on a tour of the people from my own life who would have been lampooned in the show. Then that neural pathway gave way to another one, and before I knew it I was compiling the greatest Seinfeld episodes of all time. In the end I came up with this little lot… ordered from BEST to TENTH BEST…

The Phone Message (Series 2) – Seinfeld devotees all know that George was really Larry David and here George/Larry refuses to go up to his date’s apartment “for coffee” because he doesn’t like to drink caffeine at night. He later puts two and two together and twigs that she was probably offering another kind of coffee. Sex coffee.

The Doorman (Series 6) – in amongst the legions of great cameos, the passive aggressive doorman played by Larry Miller might be the best – the BEST, Jerry, THE BEST! (in joke) – so good he should have had his own series.

The Bizarro Jerry (Series 8) – the eighth season would be a contender for the greatest of the nine, and this episode features a lady with gigantic man-hands and a secret club for hot people that George somehow infiltrates despite looking like Danny DeVito playing Elton John.

The Pitch (Series 4) – like putting a mirror in front of a mirror possibly in front of another mirror (and possibly one more), this ep found George and Jerry pitching a “show about nothing” to NBC, which is exactly what happened with Jerry Seinfeld and Larry David in real life.

The Fix-Up (Series 3) – It’s a classic tale of boy gets set up with girl, boy borrows condom from friend, boy bonks girl, boy finds out that condom was faulty and girl might have a bun in the ole vag.

The Contest (Series 4) – universally considered the funniest sitcom episode of all time, this finds the gang competing to see who can go the longest without tearing into their underpants and wanking themselves to kingdom come. Elaine proves surprisingly incapable of keeping herself from noodling away in the understairs cupboard.

The Switch (Series 6) – Features one of the most intense diner scenes you’ll ever see, including the one in Pulp Fiction and the other one in Heat (and the many ones in the movie Diner) – Jerry plots to switch his girlfriend for her roomie by suggesting group sex.

The English Patient (Series 8) – like so many sane people who don’t like slow moving love stories, Elaine hates The English Patient, but in a magnificently mischievous sitcom twist, everyone else absolutely adores it. This episode scores bonus points for a cracking turn from Mr Peterman (arguably the best recurring guest).

The Parking Garage (Series 3) – once in a while the little tinkers behind the scenes liked to set their episodes in unusual locations and film them in real time, and this was the one that worked best as the gang potter around a multistory carpark being very very hilarious at one another.

The Voice (Series 9) – The tenth spot was fiercely contested with The Sponge, The Abstinence, The Face Painter and The Serenity Now almost creeping in. But in the end this guy snaffled it – features Kramerica Industries and a pompous talking bellybutton.