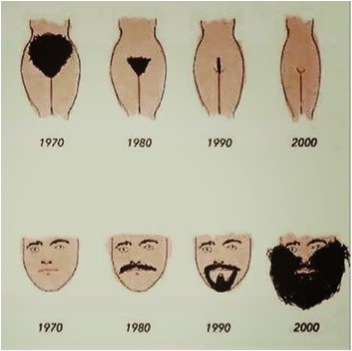 Could trend forecasters have anticipated this shift?  Trends in sex, food and fashion are moving faster than ever, (hey thanks internet!) but how do you keep on top of it all without constantly feeling out of step and embarrassed especially as far as sex and cooking is concerned?

I remember back in the early 90s my colleague Lucy bumped into the office bitch in the supermarket.  The girl took one look in her basket and scoffed “button mushrooms? HA! HOW EIGHTIES!” then swanned off.  Although we hated her, we respected her as some sort of arbiter of taste due to her posh accent.  We weren’t yet proud of our midlands accents and hadn’t learnt that style can’t be bought. Lucy never peeled another button mushroom again.

The mushroom-shaming incident got me thinking about how your repertoire of recipes can so quickly be out of date these days.  Are food trends just another scam to keep us all spending and buying more obscure ingredients? So often Nigella or one of those other food bullies will gallantly advise us to just chuck in to the pot some Star Anise, or Sumac like we all have this shit lying around in our cupboards in abundance. Except now it’s called a fucking larder.

I know you, this is what your CUPBOARDS consist of:

Maybe you will argue how fantastic it is that we are all experiencing new flavours and experimenting all the time.  But it’s making me dizzy and insecure when sometimes all you REALLY want to eat is a massive, white, garlic bread baguette at the local Italian. This is another thing that has changed, our eating out habits and our expectations. Eating out now is so common, it isn’t such a special occasion, rather just something you do when you’re hungry.

My friend Teresa and I were reminiscing about going out for dinner in the 80s being such a big deal.  To go to your local Carvery or Berni Inn on a Sunday was a real treat.  Her mum would wear a peach suit – A SUIT! A BLOUSE! TIGHTS! Who wears TIGHTS? – a low heeled court shoe, and earrings with matching necklace.  The perm would be teased with an afro comb and lashings of hairspray in to a perfectly symmetrical devotional “do” to Barbara Streisand.

My dad would have sat in a blood-vessel-bursting hot Radox bath for an hour, doused in Paco Rabanne and then been ironed in to a stiff shirt.  Honestly, I remember my mum using the hot iron ON BODY. Us kids were no slouches either, my brother had a red tie on a piece of elastic from his Holy Communion. I had a Fergie bow at the end of my scalp scraping French plait (braid).  The plait was so tight you could see my pituitary gland, but necessary.  Round our way the neatness of your French plait was a direct correlation to how clean your house was. It was as important a social indicator as having spotless evenly gathered net curtains.

Sadly, nowadays you are lucky if Georgia and Phoebe have the energy to pass a comb through their hair or take off last night’s make up. Scraggy vintage cardigans hang nonchalantly off one shoulder, my mum would have described it as “you look like you’ve just been pulled through a hedge backwards”. No reservations allowed for dinner anymore, you must stand in line with these people for some hand wanked organic coffee and THE BEST Peruvian Mexican Japanese fusion eggs with wild mint rara sauce. AKA eggs on toast for 20 quid served in a brown paper bag. ON THE STREET!  I’m not fucking entertaining this shite.

We had a 80s themed Xmas party at work and do you know what everyone wore? Tacky leotards, headbands, blue eyeshadow and glow sticks.  I had to explain to the kids at work that they had got it all so wrong.  The 80s weren’t tacky they were very sophisticated and stylish. The eye make-up was beautifully combined and blended, it was a time of artistic expression…all over your face. Don’t you miss the glamour and pomp of the 80s? Reflected in everything even the food packaging.  Remember the Ferrero Rocher in its tough little gold jacket and arrogant frilly paper skirt? Or the highfalutin After Eight Mint, a single paper envelope for every wafer thin chocolate.  That was how you showed your wealth.

My mum knocked out the same dinner party fayre for decades.  I don’t need to tell you what it was, yours will be the same.  Prawn cocktail, steak, onion rings, mushrooms, chips done in the deep fat fryer, black forest gateau/ Mint Viennetta and in later years tiramisu. Irish coffee to follow which I learnt to make from age 5, stood on a chair with boiling hot water unsupervised with ten drunk adults in the next room? Don’t worry about it.  The kids had to pitch in and do the washing up. Back when parents were the boss and you were just their handy little slaves. I tried discussing this with my new French toy boy. He reckons that in France there were no classic staples that were repeated – what not even Coq au Vin? He is disgusted with my ignorance, but I find it hard to believe, the French are sticklers for tradition Non?

125g Normal mushrooms, the recipe I used called for open cap mushrooms, I like chestnut mushrooms, but hey use button mushrooms for all I care.

1 pack of puff pastry – aint nobody trying to dick about making pastry these days, for savoury things at least.

100 ml Red wine. You can buy a mini bottle for the recipe or a big bottle and drink the rest of it as you go along, whatever your heart desires

A tbsp of brandy or whiskey or whatever

2 fillet steaks about 175g each

Pinch of nutmeg if you have it

First things first get all your ingredients ready…