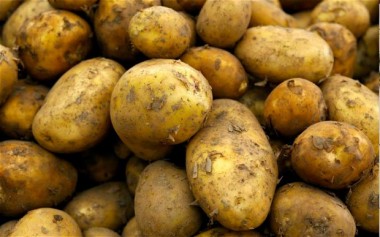 For the sake of this short piece, let’s say that the other day as I was staring out of the window chomping on an apple, my hair was glossy and impenetrable, I surveyed my apple – the greenness, the flecks of juice on the skin, the acidic hit at the back of my throat. Thoughts swept through my mind like a tsunami of words and graphic punctuation, one of them was “what’s the best way to eat a potato?” I ran to my computer and started listing them in order, from best to less best, and here’s what we all ended up with…

Jacket Potatoes – I used to hate these when I was a kid, but now I’m a man. A strong man with pubes upon more pubes upon pubes. It’s actually quite gross. The easiest potato to cook, you just put them in the oven and walk off.

Chips – first fried in Belgium back in the olden days, during the historical era you’ll remember from school text books, chips then traveled the culinary circuit before ending up in the gastronomic capital of Oldham, which is an English city that was named after some delicious old ham.

Potato Salad – the versatility of potatoes is such that you can easily enjoy them cold straight from the fridge. The best ones are the small testicle-sized ones you get in Sainsburys. Just ask someone in a Sainsburys uniform, they’ll tell you where they are. Or look for the ‘ball-shaped potatoes’ aisle.

Mashed Potatoes – so there I was, looking at my plate of sausages and wondering what was missing. There were sausages, about three, possibly four, beside them in a Perspex jug slopped some onion gravy. Side to side, like a savory current on the sea, brown like the night. But what was missing? What was it? Cut a long story short, it was mash.

Roast Potatoes – everyone’s got a theory about roast potatoes, their own secret way of making them special. Par boiling first, going berserk on them with a fork midway through. Me, I like to douse them in the fresh fat of a murdered duck, it gives them a rich texture and a great backstory.

Hash Browns/Latke – sometimes in life it can be impossible to make a decision, there’s the famous advert ‘Daddy or Chips?’ which was later reimagined into a much darker context for the movie Sophie’s Choice. In my case, I can’t choose between a hash brown and the golden brown potato latke. I’ll take both.

Potato Dauphinoise – hailing from the Dauphine area of France, these involve slicing strips of potato quite thinly then cooking them in cream and garlic, before feeding them to a beautiful woman with hairy armpits then having sex. More recently people have started using crème fraiche, which is French for Fraiche Cream.

Leek and Potato Soup – some foodstuffs can’t handle being morphed into different scientific states, but a potato can, it doesn’t give a fuck. Bake it, fry it, mash it, it’s all good. Put it in a blender with some other veg, it doesn’t care. Two words: versatile.

Crisps – so-named on account of their impressive texture, crisps have been making children unbelievably happy for well over two thousand years. Salt and Vinegar has always been a popular choice, but to be honest we all much prefer Cheese and Onion.

Gnocchi – embarrassingly for some people, Gnocchi is one of those trick words that comes armed with a silent letter at the beginning to totally mess with your mind. Plus the ‘ch’ bit is pronounced like a ‘kicking K’, so now the waiter is laughing at you and your date is politely stifling a giggle and making a mental note never to have sex with you – the whole thing’s a fucking nightmare from beginning to end.