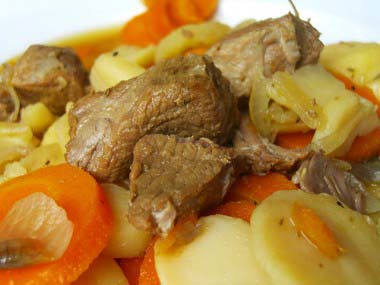 Remember those parks? That Summer? The way small circles of handsome people with linen shirts on would turn up on mopeds to fold cold meats into their mouths, and play it all sophisticated regardless that a swarm of screaming maniacs were hurtling around behind them, hoofing sports objects into one another’s faces, and causing a meaty stink from a home made grill? Remember that? Beautiful Picnic Season? Well, you can forget about it now, sister, because we’re into the annual eight months of cold! Men will grow beards, women will cease to wax, we’re all going to become soft about the edges, and warm on the inside. That’s because it’s hearty food season, meaning that the smell of boiling stews, roasting chickens, and simmering chowdas will fill the air. Evenings will be spent stomping the snow from your desert boots as you enter from the cold into a cuddle of warm central heating, ready to tuck into something piping hot that doesn’t require much surgery – just a big spoon and a giant, hungry mouth.

With that in mind, we’ve once again thrown open the Interestment Cook Book, but this time intent on finding warm hearty recipes that even a brain damaged mouse would be able to throw together. Today, Irish Stew…

Now, chop up your lamb into chunks, then do the same with the veg. Coat the lamb in flour mixed with salt and pepper, and brown it all in a pan for a couple of minutes. Throw everything into a massive pot, with enough stock (either vegetable, or lamb) or water to ensure it’s all floating a little bit, then throw in your herbs, a bit of worcestershire sauce if you have it, perhaps a bay leaf, boil it up, then stick it in the oven for at least a couple of hours. The Interestment method actually involves cooking stews on a fairly low heat for the whole day. Sometimes we even like to cook them overnight. Then bosh, one delicious Irish Stew!