In appreciation of MasterChef Australia… 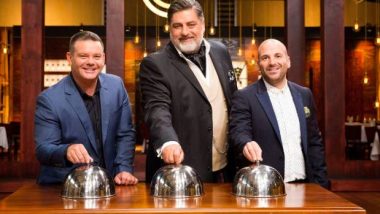 Have you looked out of the window lately? It’s fucking horrible. People blowing things up, people blowing other people up, people threatening to blow the world up, bumbling idiots bumbling, crooked crooks crooking, the mask of togetherness dropped, entire nations split into pieces. Where is the hope? The joy? The scampi tail with mango salsa, fresh mint, and a corn puree? Great question, particularly the last bit – it’s on Channel W every weeknight on a terrific little show called MasterChef Australia.

Now, you clicked on this piece, so a rudimentary calculator would suggest that you already know all about the UK incarnations of this fine institution – you’ve seen Torode delivering neat mouthfuls to his hamster cheeks while Wallace licks jam off a wooden spoon. You get it. You’ve seen the one where Michel Roux Jr appears ghostlike from behind an oven with eyes like ping pong balls. If you wind the clock back far enough, you might even remember the original version with Lloyd Grossman – the only man in the world who could sing “You say potato, I say potarto” and actually mean it.

But when it comes to MasterChef Australia, it is somehow more than the sum of its parts. It’s not just the food, the competition, it’s the bare-faced optimism that underlies the whole thing. Vibrant and engaging rounds find the contestants inventing new dishes on the spot from a Utopian pantry, or cooking against professional chefs in a bid to humiliate them on television. The three main judges look on like a funny mirror version of the Three Bears. You’ve got little George Calombaris, whose head sweats if he detects chillies in his food. Medium-sized Gary Mehigan who stares at well-presented dishes like he’s about to unzip his trousers. And massive Matt “The Cravat” Preston – a giant in suits made from nursing home curtains. There are regular visits from great chefs. A local hero called Shannon Bennett. Marco Pierre White will often wander in to whisper sage advice like it’s a death threat. Yotam Ottolenghi might take the wheel to steer the contestants towards their “food goals”. Or Heston Blumenthal will arrive through a smog of dried ice, his godawful glasses somehow seeming cutting edge, because it’s Australia, where it’s permanently 2003.

The amateur cooks are forever “super-pumped” or “super-excited” or “super-nervous”, sprinting around the kitchen like they’re doing circuits, high fiving and chest bumping each other in between rounds. In fact, the key contrast between this version and the UK one, is that the contestants are literally having the greatest time of their lives and they can’t not show it – even when they’re booted off, they’re met with an uplifting piano solo and an encouraging speech about “never giving up on your dreams”. Honestly, don’t underestimate how much we need that now. Depressing news on telly, the perpetual outrage that has butchered Twitter. At times like this, what you really need is a guy called Trent getting disproportionally enthusiastic about some pasta he just made from scratch.