I’ve been a dad-of-two for a whole year, here’s what I know

Welcome to the final parenting post (for a while anyway) 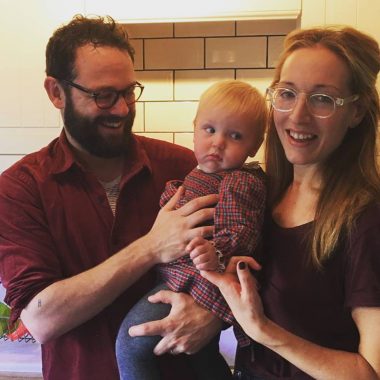 We made it, another whole year with another whole child. This one emerging into the world on the back of an insanely fast labour of 15 minutes, almost born into a pair of knickers (true story). That was 12 long months ago. I went home that night frazzled. I ate pizza, drank beer and barely slept.

I’d love to say I’ve been doing much the same ever since, but I haven’t. I’ve been raising children while attempting to retain my sanity, and not always doing a very good job of it. I look into their wide hopeful eyes, and while enchanted by their enviable innocence, I’ve questioned on a daily basis why the bloody fuck I decided to WRITE for a living. What a stupid idea. Everyone’s a writer. You’re a writer, your nan (god rest her soul) is a writer, literally every human being on the face of the earth with a pen and a lucid thought is a writer. It’s a silly thing to do and no one gives you any money for it. So there’s that.

I’ve also seen my older child morph into a functioning human being with independent thoughts, feelings and emotions. So now, where once he’d barrel into a room and instinctively punch you in the dick, now he’s tentative and in need of comfort and reassurance, his default setting is to be a bit shy. This is all nature at work, not nurture – we attempted to mould a fearless brat who could stride into Simon Cowell’s office doing mad vocal runs, but we didn’t factor in one decisive element: he’s a human. Humans are weird and complicated, we undermine ourselves, and every time I see his shyness taking over, without wanting to sound like the cheesemeister general, I love him even more. I know exactly how he feels, because that’s me going into every single room I’ve ever been into, the only difference being that I’ve learned to hide it all behind beards and jokes. It reminds you that for all the wonder that childhood brings it’s also full of giant hurdles we never actually get over. We just learn to manoeuvre around them instead.

But the real hero of this past year is my beautiful daughter. A gigantic baby in the 99th percentile (whatever the fuck that means), who a kindly midwife has already advised to go on a diet, lest her podge offend thee. While I’ve been losing my mind trying to keep our roof roofed and our pockets from emptying, while my wife has juggled endlessly to keep everyone nourished in as many ways as you can imagine, and while my son has been building up the confidence to punch unsuspecting dads in the dick again, my (not so) little girl has been the only one really keeping it all together. Quietly going about her business of growing teeth, approximating talking, gyrating magnificently to music, and now walking around like she owns the place. It’s a different experience second time around, you’re not watching every developmental step with the same open-mouthed awe as before and sometimes it all just creeps up on you, but the impact is still the same. I still love her in a way that can make me cry if I think about it too much, and despite having only been with us for a year, she is a crucial irreplaceable part of our home.

Welcome aboard Viv! One day I’ll be the bumbling old fucker walking you down the aisle.

ALSO in an interesting aside, when she turned one last weekend, it was ten years ago to the day that I first met her mum in a pub. To the DAY. When you think about it, that’s basically when my kids were conceived. (gross!)