I’ve been a dad-of-two for eleven months, here’s what I know 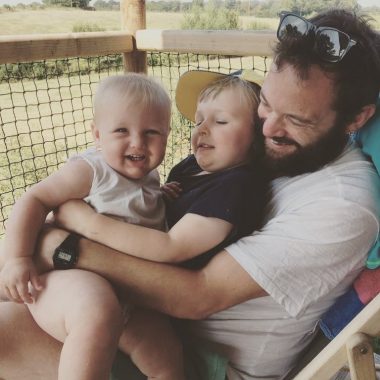 Two things have happened to me recently that are probably worthy of note. One is that I went away on holiday, and after six years of going completely cigarette-free I decided I’d smoke a few fags (and they were all lovely, thanks). The other is that I invested in some very tight jeans. The kind of jeans that, were you to have a really massive willy, everyone would be able to see each and every detail of the veiny beast within, the denim fabric clinging to it like a koala to a tree. Thankfully we don’t have too much to worry about on that front, my willy is only vaguely gigantic, but I suppose what I’m trying to say is that at some deep (or shallow, doesn’t have to be deep) psychological level, I’m fighting against the inevitability of ageing.

In fact, you only need to sift through my endless monologues about parenting to spot the shift in psyche from having one child to having two. When you have one, the whole experience is new, exciting, and completely objective. You watch them, you report back with spittle-flecked enthusiasm like you’re the first father the world has ever known. You’ve become part of the parenting community, but truthfully, you wear the title like an ill-fitting crown. When you have a second child things start to get existential.  You are a parent now, it’s as unavoidable as an elephant in a hallway – you’re literally steeped in parenthood, an old hand, swimming in it, you have to stand by the school gates waiting like a butler, you have to not smoke for fear of falling foul of a perfectly avoidable premature death, leaving your family cursing your charred bones. You realise that with great responsibility comes great discombobulation. You’re a molecule within a molecule, a crow in a field of pigeons, you’re trying to figure out your place in all of this without allowing your eyes to widen so far as to betray your fear and uncertainty.

It’s weird, and even weirder is that the more I get to know my children, the more I’ve started trying to see the world through their eyes. I wonder what they will make of things when they become the people wearing big-boy pants telling you what’s what, the ones making the world spin in a thousand different directions. I even judge my own actions by what their reactions might be when they’re older. Do they want a sensible dad who provides them with their basic needs, keeps them happy, healthy, fed and watered? Or do they want some dude with an earring attempting to carry off jeggings, while spluttering his way through a Marlboro Light?

I think we all know the answer to that little conundrum.

But do we though?