Imagine this without the basil 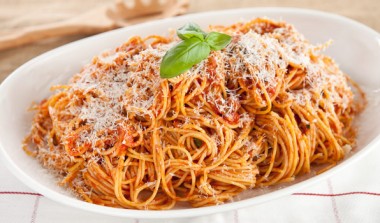 Something amazing happened over the weekend when I was flicking through the supplements – I spotted a food recipe and a day later I made it. Normally I’m halted in my tracks the minute they say star anise, or when they mention a saddle of lamb, but this was different, this was a new day, the stars somehow aligned. There was talk of tomatoes – I had tomatoes – talk of garlic – I’ve got shitloads of garlic, you kidding me! – then red wine vinegar – okay I’ve got white, but that’s close – Olive Oil – I’ve got Olive Oil! – spaghetti – I love spaghetti! – Basil – okay, fuck basil. I didn’t have basil. But I had the majority of the ingreeds. Granted, it was just a side dish for some over-complicated chicken-in-breadcrumbs situation, but the point is that for once in my life I read a recipe and it didn’t require a trip to the shops. Hence, less than 24 hours later I embarked on a wild journey to make this so-called “Spaghetti in Tomato Sauce” and guess what? It was really easy to make and it tasted delicious. Now you have a go…

Garlic – just one large bulb, or two small ones. I used one large.

Tomatoes – it said “heritage tomatoes” I just used some of those little ones on the stick.

White Wine Vinegar – they said RED, I had WHITE. It was still nice.

Some salt and pep – be as liberal as you want.

Spaghetti – do enough for however many people you are feeding.

How to make it:

1. Splosh some olive oil into a frying pan

2. After about a minute on a warm heat add one big clove of thinly sliced and diced garlic.

3. Leave it for a couple of minutes, then chuck in a shitload of roughly chopped tomatoes and leave them sweating away for about 10 mins on a medium-low heat.

4. Now add a splash (about a tablespoon) of the vinegar, a bit of salt and pep and you’re basically good to go.

5. Throw in the spaghetti that you should have started about five mins ago, mix it all around for a minute or so.