A tale of one woman’s bumpy love journey

By the brilliant Oral Eek 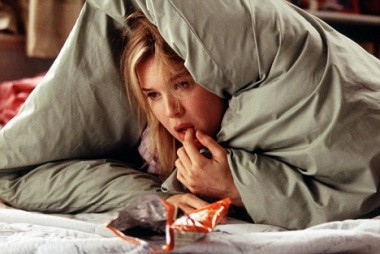 So there I was singing “Baby I Love Your Way” at a karaoke bar, when I looked across the room and there HE was.  I couldn’t believe it, what was HE doing HERE?

I stepped off the stage to all of my work colleagues whooping and hollering for more, and he ran over to me, looked me in the eye and said “WOW baby, I didn’t know you could sing so well! I love you.”

I couldn’t have imagined in a million years that my night would turn out this way.  I probably wouldn’t have to work another day in my life at this rate because I had unlocked a hidden natural talent, and people wanted to hear me SING! Not to mention this hunk of burning love had just come along and swept me off my feet.

I looked down and realised I had almost made a hole right through the kitchen hob from scraping off the dried milk with a knife. I was wearing my best friend’s husband’s dirty grey dressing gown and I was late for work.  “Fuck me,” I said out loud, “I’ve turned in to Bridget Jones!”

There aren’t any outstanding karaoke performances in my life but there are the constant daydreams about Mr Right, disastrous dates, a toy boy, work fuck ups and dinner parties with smug married couples that are all very real.  If I hadn’t quit booze eight months ago I would still be falling out of cabs face first, and drinking Oyster Bay for “brunch” with the girls (11am, anywhere that serves tomatoes and vodka) – I’m just one glass of Chardonnay away from that cliché of a single woman in her thirties being eaten by Alsatians.

Only yesterday at work I was singing “Up Where We Belong” with real vigour and I didn’t even realise it, until one of the hot young smart arses that sits opposite me sniggered “OH MY GOD, you have been humming that song LITERALLY all day.” I pulled my wisest, most smug, most age before beauty smile, gathered up some papers and said I’ve got to go to a meeting, please don’t misuse the word literally. And hid in the toilet for twenty minutes. Classic Bridget.

I blame my Bridgetitis on why I’ve been thinking a lot about L.O.V.E lately. I’ve also spent the last few months throwing myself at the dating scene with a mixed bag of results.

It all started on Valentine’s Day when I went out with a guy I’d just met. He spent the first thirty minutes straight telling me that it was only a matter of time before he would be extremely rich as he was going to move to California and grow weed.  Just like that he would be getting on a plane and making a fortune because he knew exactly the right fertiliser to use. There was no doubt in his mind that the US government would dish out a green card to this green fingered Brit because in his words “They must be crying out for English people who want to work there and shit”.

I tried to change the subject because it couldn’t be happening that I was spending Valentine’s Day with a guy as dumb as a rusty watering can, so I asked him what he was doing at the weekend.  And just as casual as slacks he told me “I’m going to a wedding with my girlfriend.”

“Yeah but I’m still down to fuck.”

That’s a phrase you don’t hear too often so it took me a moment to respond. I babbled on for a few minutes about something or nothing before I had the courage to ask  – “What would your girlfriend say if she knew you were on a date with another woman on VALENTINES DAY?”

He shrugged, “what’s the problem? We’re only talking.”

I apologised to him and left.  I APOLOGOSED TO HIM because he acted like I was the irrational one for not being DTF. I am used to being misread, I have the face of a thousand lies. But what gave this guy the impression I would be DTF?  Thinking about it I had been mistaken for a prostitute not so long ago but isn’t everyone? It took this guy no longer than a pint of lager to decide that his gallant advances would surely be met with open arms and open legs. Even Idris Elba bought me a cocktail and offered to get me a manicure (a backhanded compliment if ever there was one) before he invited me to his hotel room.  Granted it only took him about twenty minutes to cut to the chase but he was a bona fide CELEBRITY and his behaviour was to be expected.

I looked at my Twitter account on the long bus home hoping to cheer myself up with some banter or maybe some photos of dogs in hats. But staring back at me was a post from the last guy I really liked that read “Be My Valentine!” to his new love he found in Amsterdam.  Along with a picture of his gift to her, a really nice pair of trainers.  I wanted nice trainers.  Instead I felt like I had been kicked in the face with a very heavy old steel capped boot.

@DearGod are you taking the piss right now?  #

I went home and thought “what would Mariah Carey do?” So I ran a bubble bath spent the rest of the evening soaking in the tub and eating choc ices, daydreaming about smashing a bar stool over weed boy’s head. Maybe I could contact Idris and have him thrown down some stairs? Happy Fucking Valentine’s Day.

I am a constant source of entertainment to my many married friends (who I love very much) but they all flip from advising me that I have to get out there more, get online dating, to “you must act totally cool it will happen when you are least looking for it”. Which seems like odd advice in itself. I can pretty much guarantee nobody is getting laid whilst not looking for it and staying home alone watching Emmerdale.  If I was friends with say Beyonce or Kate Adie what would they say? I am sure they would advise me to be spending my brain power more productively on learning Japanese or getting involved with Chechnya. Perhaps posting pictures of myself on dating websites LOLing in a carefree tampon advert abandon, acting totally unavailable.  But that’s all bullshit.  It’s all just a game, we just want to be loved.

I have been on some humdingers of dates, I will write a book about it one day if I can stomach the memories. There was the guy who texted me on my way to our first date asking if I had any sex toys. He was faster off the mark than weed boy to cut to the chase, what happened to romance? Have some manners, at least try and get me drunk first. And of course the endless sick messages from perverts online.

In contrast there was my toy boy that I met on a plane, 18 years my junior. He would pick me up and drop me off in his car, lovely innocent fun times. The dates were how things used to be when you were his age and without years of baggage holding you back from saying the things that you are feeling. He would say “I think you are beautiful and funny and amazing”. I swooned.  Old fashioned romance from someone young enough to be my son. All of these dates were so valuable because they have made me realise what I stand for and what I just can’t stand.

Tinder can supply you with 40 dates a week and you can have your sex rotisserie sizzling, turning over new flavours to fill the hunger with a swipe.  You can give up on your current partner if they start to become dull and find lust in the arms of many DTFs. But truly taking the time to get to know someone? That’s the real gift.

I’m sorry if it makes me lame and less of a strong independent woman to admit that I can’t wait to care for someone. To make a packed lunch for my man and for him to pat me on the bottom as a thank you.  I want to make him my speciality – a chocolate tart that I have been perfecting over the years and is always made with love for my friends. They get the love until the day I meet someone and then I will drop them like a fresh hot piece of toast.  But for now my friends are my family and my GOD am I grateful for them!

I am making that gorgeous chocolate tart today for my friend Teresa. Tonight we will be listening to Chaka Khan and dancing, and tomorrow I will be hiding in the toilets at work and walking around with my skirt tucked in to my knickers, flirting with the office scoundrel (who is gay but I work in fashion and it’s all we’ve got).

Until such times…..let’s play out with a little Peter fucking Frampton.