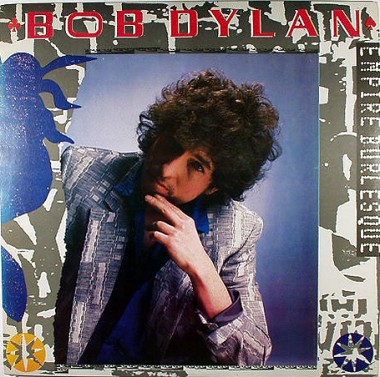 If you want to argue that Bob Dylan is not one of the greatest artists of the 20th century and beyond then I’ve got no time for you. He is, deal with it. The man almost single-handedly solidified music as an art form and inspired millions to pick up a guitar and put pen to paper. Even if the sound of his voice makes you want to pierce your eardrums with a railway spike, denying his song-writing prowess or contribution to modern culture is like denying water is wet.

Empire Burlesque dropped like a frozen turd from a 747 on the unsuspecting public on May 30th 1985. Madonna and Wham were riding high in the charts and eighties excess was at it’s peak. It’s become increasingly cool to look back on the eighties with affection, mainly by people that never lived through it and although some exceptional songs were forged in the fog of hairspray and coke dust, in truth, there’s not enough quilted toilet paper in the world to wipe away that shit stain of a decade.

I mean look at Bob. Those shoulder pads, that wig, that cover art which looks suspiciously like the work of a child that ate too many chunky crayons, vomited them out and used the gunk to finger paint. This is a man being told to get down with the kids and move with the times. He’s been steam-cleaned and packaged to make him more palatable for the modern consumer. His free-wheeling days are over, he just wants your cash and it doesn’t matter if he’s selling you a godforsaken album riddled with stinkers. He’s fucking Bob Dylan and his cult of devotees are going to put their hand in their pockets regardless of the quality. The outlaw has sold out. Viva capitalism.

But wait, hang fire. Who the hell is that bloated drunk in the straw hat on the back? Is that the same guy and if so, why would anyone in their right mind put that photograph on the reverse? I thought that plan was to sell records, not frighten children. 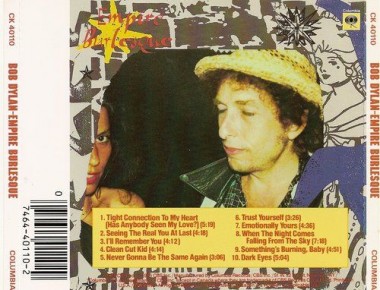 I’m taking a leap here, but I think by comparing the two pictures we finally see the hand of the artist. Sure he’s got to pay the bills, the alimony, the child support and in order to give himself the best shot of earning the dollars he’s put on a Bob Dylan circa 1980s costume and appeased his record company but it’s all smoke and mirrors. The suave icon on the front doesn’t exist, it’s the bewildered, ageing gent on the back in the depths of debauchery that knocked out this crap and if you want any more evidence of what Dylan is trying to communicate, just listen to the album. Every single song is over produced with modern arrangement but the final track, Dark Eyes, is stripped down guitar/harmonica and it’s superiority over every song that went before is astonishing. As for the lyrics, check out the video below and if you come away thinking that my theory is bullshit, feel free to call me an arsehole in the comment box below.