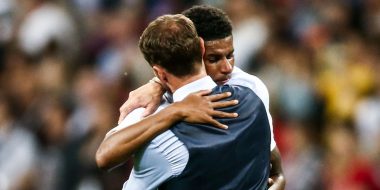 I’ve never been much of a football fan. From having to sit through tedious and seemingly never-ending conversations in the pub to which I had nothing to contribute, to the jarring irritation of intermittent yelling on the sofa next to me while I try to work or binge-watch Netflix on my iPad, right through to the appalling corruption and greed of the bigwigs who run the industry (I’m looking at you, Mr. Blatter), I’ve generally found the whole thing a bit of a downer.

It’s not that I haven’t tried – I’m a sucker for a drunken, slurred sing along and have a decidedly competitive streak to my nature, but before this summer I just couldn’t bring myself to give a shit. So when I found myself, one outrageously sunny afternoon in July, screaming at a World Cup match on a screen in a bar instead of swanning around some delightful restaurant terrace (I’ve only really ever written about food before now), I had to retrace my steps.

At the start of the tournament I was as cynical and uninterested as ever. I didn’t even recognise most of the players that wandered out for the first match I’d been dragged along to half-watch, and anecdotally pointed out to myself that I must be even more out of touch than I thought. But I was drawn in by a nagging curiosity; something was different. These weren’t the hot-headed egomaniacs who refused to pass the ball to their teammate out of greed for their own glory. They weren’t antagonising the other team, either. And the manager… the manager was wearing a waistcoat.

I became increasingly endeared by these respectable, charismatic sportsmen, and the conspicuous absence of Wayne Rooney/John Terry-esque characters fuelled my support for them. Gareth Southgate and his squad felt like a new and welcome breed in this world of spite and self-interest. As the tournament played out and I got sucked in, their displays of (mostly) humility, collaboration, respect and sportsmanship was a joy to watch — and the new approach was working. They were succeeding where no England team had succeeded before in my lifetime. Fuelled by pride and delirious in the unrelenting sunshine, I felt giddy.

In my mind (I have a tendency to overthink these things, so stay with me…) it felt like a true expression of “good” prevailing over “bad”, in the sense that Gareth Southgate et al. were throwing everything we’ve come to expect from English football teams out of the window. The egos, the hot-headedness, the internal one-upmanship, the behaviour of the fans abroad as well as the players on the pitch towards our foreign opponents were replaced by actions anyone would be proud to be represented by. In an age where we’re in grave danger of vacuous celebrities with delusions of grandeur, body-image obsessed, gender-role-normalising reality TV stars and xenophobic, ignorant politicians being the only prominent role models our youth have to cling to, is that not invaluable?

The night we got knocked out, I had a tear in my eye — not out of shattered pride (though this World Cup was the first time I’ve felt patriotic since the Olympic opening ceremony in 2012), and not for the loss of the tournament, but out of empathy for the players that I’d been so moved by, now squatting, exhausted and devastated, on the pitch.

So that’s how I, and I’m sure many others, found myself spending a few giddy weeks singing Three Lions until I was hoarse and celebrating a goal so enthusiastically I fell into a bin (true story). It was the squad’s boldness to break the mould that broke the so-called ‘curse’ (turns out all that clichéd football superstition is irresistible) on our national team, and their stoicism in their values that united the country behind them. It’s a trivial cause for this country to finally find common ground to unite over, but doesn’t that make it all the more fun to get behind?

In the words of New Order, Love’s (football’s) got the world (England) in motion, and I can’t believe it’s true.