Including this bona fide classic 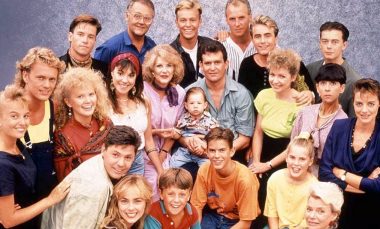 Okay, we’re getting to the spikier end of the list, but if your favourite hasn’t been mentioned yet, hold the rage in, because it might be in the next 25. Then if it isn’t you can go berserk.

The OC – a juvenile delinquent gets taken in by a rich family, squats in their pool house, and starts attending lots of huge charity fundraisers. It’s like life really.

The Returned – another one of those French shows from France, where everyone talks foreign. But by gum, the creepy lad who just stares. You don’t need a translator to know he’s scary as fuck.

Freaks and Geeks – long regarded as the show that launched a thousand bromances, it also introduced the parenting community to the name Judd, which has yet to really catch on.

Planet Earth II – like so many sequels, this whispered animal documentary from David Attenborough makes its predecessors look like a pile of goddam horse shit. Best nature doc ever.

Big Brother – not a popular choice among the intelligentsia, but let’s never forget that when it began, Big Brother was an extraordinary human experiment. And that Nasty Nick, WRITING INITIALS ON PAPER. What the fuck man!

Stranger Things – 80s nostalgia done right, in British hands this would have been a boring waddle through Thatcherism in a donkey jacket.

The Monkees – wicked sitcom, wicked band, listen to As We Go Along, and Do I Have to Do This All Over Again?, and Porpoise Song, and then basically the whole rest of the Head album. Charles Manson famously auditioned to be in the band.

One Born Every Minute – not quite as interesting when you’re not expecting a baby, but when you are this is as addictive as crack cocaine, which, FYI, is still a drug that’s best avoided. Particularly when you’re in the middle of breastfeeding.

Neighbours – Lou Carpenter’s boulder-sized head, Scott and Charlene French kissing in church, this is Australia’s finest export, and that includes all of their wonderful art and classical music.

The Real World – a bunch of strangers live together in a snazzy loft apartment, this was John the Baptist to every television show from the last twenty years. Never bettered.

Dempsey and Makepeace – a posh English rose teams up with a streetwise American cop, and their sexual chemistry spills over into real life, where they start boning big time. It’s basically the reverse Royal Wedding.

The US Office – the UK version was magnificent, the US version was even more magnificenter. And presumably there’s a Bollywood version out there that would blow your dick off.

Curb Your Enthusiasm – it’s lost a little of the original lustre, but for a while there, best show on TV.

Tomorrow’s World – why isn’t this still on? The future envisioned based not on twisted old soothsayers, but on technological advancement, it can’t lose. This was from a time when remote controls looked like witchcraft.

Ramsey’s Kitchen Nightmares – he’s been winding himself up all night, he’s pissed off with you before he’s met you, now Gordon Ramsey is going to watch you work.

Harry Hill’s TV Burp – for a while there, ITV had the most subversive show on telly, which made us all choke on our pain raisin.

The Deuce – After Freaks and Geeks, this is the second James Franco program on the list. Can you separate the art from the artist? Haven’t we covered this already? The answer is always yes. What we haven’t covered is that Maggie Gyllenhaal is the best actress in the world.

Brass Eye – someone more arch would probably say something about this being a precursor to what the world actually became.

The Big Breakfast – everyone has a favourite pairing, but let’s be clear about this: Liza Tarbuck was the best host, and Johnny Vaughan, in second place, was at the absolute peak of his powers throughout.