The Ultimate England World Cup Squad of ALL TIME

Read it and weep, other countries 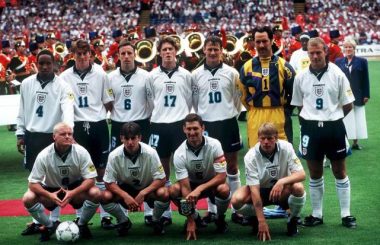 Okay look if we’re going to be totally honest with each other, I’m not sure how much I like football. The pitch area is all millionaires with Gaffney/Bowers levels of sophistication, the stands are menacing. All contorted faces and stifled rage. I once went to watch Spurs v Leeds at White Hart Lane and there were men there, so livid by the sight of football, that they looked like they were going to combust and spatter the stadium with blood, guts and possibly semen. Just explode right in front of you.

Yet, SOMEHOW, against the odds, I still love international footie tournaments (I know right! WEIRD). They’re less territorial, you’ve got the brass bands, and the jolly pubs with the big screens, the rounds of applause when someone drops a glass. Less people seem to want to brick you in the face. So with that in mind, you probably want to know what my greatest England Squad of All Time looks like. Read on, friend…

Goalkeepers – David Seaman, Gordon Banks
It’s a no brainer at the back, in between the ole sticks. You’ve got your David Seaman, with his threatening ponytail-moustache combo (popular with street thugs). Then next to him, you’ve got Gordon Banks, father of Tyra, brother of Elizabeth. He once made a great save.

Defenders – Rio Ferdinand, Bobby Moore, Ledley King, Tony Adams, Lee Dixon, Graeme Le Saux, Paul Parker, Stuart Pearce
We’re talking a back four here, lads. None of your threes or your fives, no sixes, a simple four. Two in the middle yelling sweet murder, then a couple of pussies either side making darting runs up and down the flank. You’ll notice a fine mixture of psychotic rage and leggy elegance in this selection. You’ve got Stuart Pearce pogoing to The Buzzcocks, Dixon miming seductively to Desperado by The Eagles, Ferdinand doing mad vocal runs into a hairbrush, and Le Saux in half-moon glasses smoking a pipe and doing the Times cryptic crossword. It’s all about balance.

Midfielders – Paul Scholes, John Barnes, Steve McManaman, Paul Gascoigne, Matt Le Tissier, Glen Hoddle, Chris Waddle, Steven Gerrard, Bryan Robson
It tells you everything about how rich the pickings are that I didn’t even consider recent greats like Owen Hargreaves and Nick Barmby for this squad. No James Milner providing big laughs on the bus to and from the match. Even David Beckham couldn’t swan in, and he’s by far the most famous Englishman of all time. He could walk into any hotel in the whole world and just ask for a pizza. Stand there, right now, asking for a pizza, and because he’s David Beckham he’d get it. Deep pan Hawaiian. Anyway, I thought I’d go for players who’d have you out of your seat jumping six feet in the air. Hoddle and Waddle could also harmonise during the anthems.

Attackers – Peter Beardsley, Alan Shearer, Kevin Keegan, Jimmy Greaves
Two sets of two here, featuring the mercurial, handsome talents of Peter Beardsley, the charismatic finishing of Alan Shearer, the relentless scurrying around and poking people of Kevin Keegan, and the moustachelessness of Jimmy Greavsie. People like Robbie Fowler, Michael Owen, Wayne Rooney, Gary Lineker, and Geoff Hurst are probably reading this and crying inconsolably right now, wondering why the hell they’ve missed out. What more could they do? They were out there giving 110 per cent for king and country, 24/7. They might fall into a depression or head to the gym for the most aggressive workout they’ve ever done. Michael Owen’s probably shrieking and trying to lift a medicine ball as you read this. But, you know what, that’s just football. You have to learn to take rejection.