Hmm, shouldn’t that be IN? 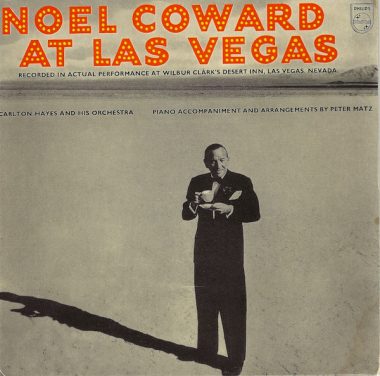 Look at the cover – has the Savoy American Bar backdrop been removed?

I’m afraid not, my dear readers, it’s actually the one and only Noël Coward joining those mad dogs out there in the midday Nevada sun, dressed to the nines, with not even the slightest inclination to perspire. Talk about a cool cucumber.

With his unmistakable style and grace you can almost hear him mentally preparing to take on his very first Las Vegas audience and teach those gorgeous Yankees a lesson in wit and satire.

But how does it all sound? I’ll save you the trouble – it’s an absolute joy. Noël Coward wows his gambling audience with a feast of his cheekiest, wittiest and most lyrical numbers. The epitome of debonair Englishness throughout.

As an actor, playwright, composer, director AND singer, Coward had a monopoly on the British theatre scene from the 1920s through to the 1940s, but by the mid 1950s his career was truly on the wain.  He was seen as a little too old fashioned and outdated to operate in the new world order of the post war years.

Salvation would come, however, in an unlikely form of an invitation to take his nightclub act to Wilbur Clark’s Desert Inn, Las Vegas for a one month residency. And thankfully for all of us, some bright spark from Philips Records popped along to record the opening performance. The rest, as they say, is history.

The audience on that first night was pure Hollywood thoroughbreds, ferried in specially by Dr Blue Eyes himself, Frank Sinatra. Each time I listen I always get a real buzz of excitement just knowing that amongst the laughter and cheers are Sinatra, Niven, Bacall, Harvey (Laurence, not Weinstein) and Garland.

Listen to the full album here