Here she is, Ms Ciccone 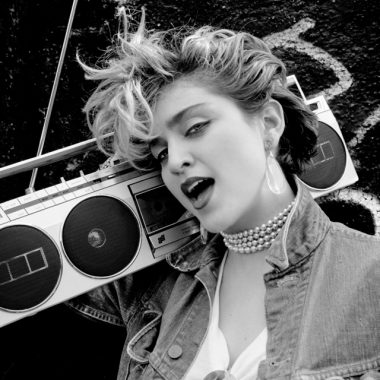 In the same way that you don’t call your son Hercules unless you’re 100 per cent sure he’ll be built like a brick shithouse, you should probably think twice about naming your daughter after the (alleged) mother of God, unless you’re fully expecting a life less ordinary. Luckily, it was a gamble that paid off for Mr and Mrs Ciccone, as their lass barged into the 1980s like a bounty hunter lugging the head of Han Solo, and blew the planet up with hit single after hit single. It was a glorious time (we all wore shoulder pads and drank champagne and wore fishnet tights as gloves), so let’s relive it now with the best ever Madonna songs ranked from Best to Tenth Best…

Open Your Heart
Remember the video: young lad, at a peep show – just there on the vaguest off-chance that the biggest star in the world will be simulating sex acts for furtive masturbators. And guess bloody what?

Live to Tell
From the soundtrack to At Close Range, which stars Sean Penn and Cristopher Walken as Hollywood’s most dysfunctional father/son since 73-year-old Sean Connery somehow managed to sire 72-year-old Harrison Ford.

Vogue
This was the song that made me decide to be a model. Unfortunately, the people who hire models had other ideas.

Everybody
Next time you’re in a pub quiz and the question is “what was Madonna’s first single?” now you know the answer – it was this. Just knowing that could be the key to winning a £30 bar tab for you and the other members of Let’s Get Quizzical.

Lucky Star
True story: I was once squished on a packed tube carriage with this song playing noisily out of my cheap headphones. I began to mouth along, people took notice, I began to faux-massage my breasts, people dry heaved.

Into the Groove
As metaphors go, this one is about as subtle as slowly eating a banana, or pretending to enjoy an oyster. Oh hang on, sorry, my producer is in my ear telling me that “the groove” is “music”. Not a vaginal groove. My mistake.

Borderline
The intro to this song is one of the very few things in life guaranteed to make me ejaculate.

Human Nature
Sounds a bit like TLC, which is a high compliment, and the video looks like a bondage mime troupe broke into Ikea overnight. Less of a compliment.

Express Yourself
The most Madonna sounding song of all time.