Including these cool gals… 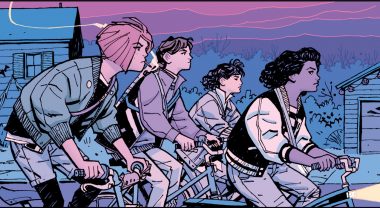 2016 will definitely go down as the weirdest year of all time, possibly the nastiest for a while. Debates have been blown wide open about gender, race, sex, fame, celebrity, politics, how we should treat each other generally – all big important topics that seem to have devolved over the last ten years like a fat/thin man/woman peddling backwards on an exercise bike/rowing machine. Pessimism is the new optimism, you can’t move for impotent outrage on social media sites, and sometimes it’s hard to acknowledge the good things in the world.

Hence, for the benefit of everyone, I thought I’d compile a small list of some wickedy-wick things that are still out there proving that the world is a decent place to be. Now remember, I’m a deeply, DEEPLY pretentious man, so this might all sound a bit aching, but that’s a risk I’m prepared to take. I’m just a boy (with a really large beard) standing in front of a girl (with a weird Joan of Arc haircut), wondering if I should get a really small but symbolic tattoo somewhere noticeable.

Comics – I love comics, they’re cool and not just for kids. You’ve got the edgy sexual politics and real life aging and shags in Love and Rockets (back this year, superfresh!), the Stranger Things style 80s teen thriller pastiche Paper Girls (new this year, jumbo-cool!), then the birth of rap told in modern hieroglyphics in Hip Hop Family Tree (Ker-pow!). Comics are officially dope again. After not being dope for a bit.

Netflix – some guys use Netflix and chill as a euphemism to mean they’re getting their groove on with the sex, but when I say it, it means what it says, it means I’m watching television. It’s recently started stocking Freaks and Geeks, which is the best show about teenagers since Heartbreak High, and in 2016 I’ve particularly enjoyed Bloodline (Season 2), Fargo (Season 2), and Ben and Holly’s Little Kingdom (episodes 1-1036). It’s the future of how we all watch telly, or at least it was five years ago, now it’s just how we watch telly. Welcome to the future, I hope you enjoy your meal tablets and stand-up baths.

Miles Davis Records – it’s right, I like JAZZ, all jazz. The tickly drums, the brass instruments, some dude taking a piano for a stroll. I’m precisely the kind of middle class white guy who jerks a chicken and listens to Bitches Brew on a Sunday afternoon. Great to work to, appalling to run to, impossible to gently bone your partner to.

Adam Buxton Podcasts – you can’t move for podcasts – or poddies as they’re known on the street. You’ve got poddies about music, poddies where guys make guys laugh, or chicks talk about feminist stuff, but the poddy I always end on is the one with Adam Buxton chewing the fat with his celebbo-mates. It’s the best chat show since Wogan.

David Foster Wallace Short Stories – short stories are a refreshing alternative to really long ones, especially in a world full of comics and poddies, so I like to eat my short stories (with my eyes) on evenings and weekends or during tube rides. My faves are by US guys like that David Foster Wallace (RIP) and George Saunders. They make me feel hip, they make me feel edgy, they make me feel James Bond, super intellectual, oh yes. Also check out BJ Novak’s work (and before you look it up, his name is not short for Blow Job Novak, which, I agree, feels like a missed opportunity).

Masterchef Australia – if 2016 were a person, they’d be prone to gigantic overstatements, hence I’d like to declare this the greatest TV show ever made. It’s like UK Masterchef took a bunch of anabolic pills and some ecstasy, drank a voddy, listened to a poddy, and became huge, muscular and full of love. It’s like you’ve joined a cult and the food looks really, genuinely bonza.

Five Guys Cheeseburgers – when you’ve finally tired of guys called Fin or girls called Saz putting bacon marmalade onto toasted brioche and rosemarying your fries, eventually you come to a place where a cheeseburger just needs to be covered in orange goo and garnished with simple things like gherkins and lettuce. Hence Five Guys is hands down the best fast food chain there has ever been, and I include McDons, Burger Juice, and Pizza Fart in that.

Reebok Classics – the nice thing about the swishy world of fashion is that it’s always changing and always constant, like an endless river of recycled water, forever flowing, soundtracked by the shrieks of excited designers or the tutting of someone flouncing off because a group of people appeared to be negatively judging them. It’s perpetually-distracted state means that every once in while my favourite trainers will get the ironic nod from the hipper circles, while always being faintly synonymous with lads and opportunistic burglars. In any given social situation, you basically can’t lose.

Amstel, Red Stripe, Becks Vier – for all that is enterprising and DIY about these micro-breweries concocting craft ales, you can’t escape the fact that they all taste a bit like someone did the washing up and didn’t rinse your glass. What’s wrong with a nice, tastelessly bland lager that sits happily at 4-4.5 per cent? Perfect for guys like me who like to enjoy six before having a little lie down for eight hours.

The Salsoul Record Label – uplifting soul music, all the baddies in the world should be forced into a contained room to listen to The Beat Goes On and On by Ripple. Here’s a prediction: they’d all end up snogging.

Broad City – hip New York City sitcoms aren’t exactly thin on the ground – you’ve got your Girls, your Master of None, your Friends repeats, your Seinfeld repeats, your King of Queens repeats, your Kimmy Schmidt, probably loads of others that have suddenly popped out of my head – but this is like a hybred of everything good and funny about all of them, with stoner chicks going about their business and being very fluid with their sexuality. I should also reserve an honourable mention for Horace and Pete, Louis CK’s anti-sitcom sitcom, which is all a bit Beckett, and all a bit wickedy-fresh.

Pork Pies with Branston Pickle – you can literally go into Marks and Spencer’s right now and buy mini pork pies with a healthy dollop of Branston Pickle on the top, then pay money for them, then go and stand in the street and just shovel them into your mouth while passers-by fall in love with you. The perfect way to see off an afternoon.