The 9 Greatest Things you can Barbecue

There I am, doing a massive steak 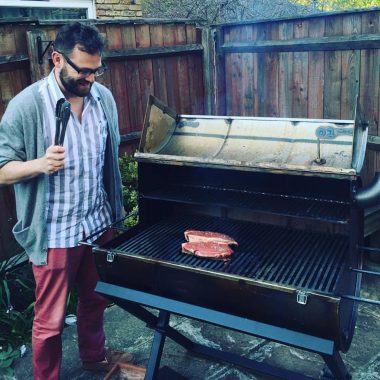 There is literally no greater feeling in the world than watching food cook on a barbecue and then eating it with your mouth. Sex isn’t as good, being sky high on a cocktail of drugs doesn’t feel any better, being publicly applauded by a roomful of strangers for something amazing you’ve achieved is only a fraction as fun. That’s because somewhere in the depths of our being, at the primal core where deep-rooted instincts lurk, we have been programmed to become stimulated in nearly every way by the sight of a beast being marinated overnight and cooked on a smouldering grill. In the olden days this might be a slaughtered walrus roasted on a bonfire, now it’s something pre-prepared that we got from the Wild Animals aisle in Sainsburys. But whatever way, it’s a crazy ride, and with that in mind, here are the nine best things to put on your barbecue and then prod brainlessly with some big tongs…

Burgers
Burgers are so tasty and so versatile. Add a bun, throw on a slice of cheese, add another burger, get some secret sauce, shred some lettuce, throw on some gherkins, chuck in some onions, borrow some sesame seeds from your mum. Some of you might have noticed that I’m currently making a Big Mac.

Sausages
Once rumoured to be nothing more than large pig willies, sausages are actually much more than that. They’re the pig’s willy, balls, anus, scrotum, eye socket, perineum, G-spot, nipples, teeth, stomach, and sperm duct. Sounds pretty gross, and yet, when you stir all of these putrid off-cuts around in a Le Creuset bowl and siphon them into a used condom, you end up with a truly delicious barbecue option. Add bread and fried onions to make it a hot dog.

Entire chickens
Don’t waste your time butchering these roaring beasts, instead honour your fight and kneel to their majesty and grace by skewering them whole on a spike that goes from their bumhole to their mouth – the mouth that should hopefully be fixed in its final expression of horror as the farmer whispered some cruel last words and put on his strangling gloves. Then slowly turn them above a flame. In France this is called a Rotisserie.

Halloumi
One of the great phonetic cheeses, you literally pronounce it as it reads, which means you don’t need to get so nervous when you order it from a posh cheese counter in an upmarket deli. No one’s judging you here, it’s not like Gruyere or croissant that have no universally acknowledged correct ways to say them. And, even better, when you grill this it doesn’t melt into a thousand tiny globules of volcanic lava that will burn the roof of your mouth off, it stays entirely intact. NB. it’s also extremely squeaky, so get ready to LOL your arse off about that.

Butterflied slabs of Lamb
You probably look at a leg of lamb, point and think “no way, no way can that go on a barbecue, it’s got a bone in it”. And you’re right, there’s a whole leg bone in there that will take you absolutely yonks to cook, and no one has yonks, not any more. But this is where butchers really start to earn their money, because a few minutes of busy working man’s surgery, and that thing’s butterflied (think “spread-eagled” but less sexual) ready for the grill. Just chuck it on top of the fire like the bloodied corpse of your worst enemy/best friend and give it a couple of hours to crisp up.

Ribeye Steaks
Every summer A&E is teeming with people who got into a scuffle over what the best cut of steak is and ended up punching the crap out of one another in front of screaming women and children and bus drivers (I know right! What are they doing there?). The depressing thing about that mental image is that it’s so unnecessary, we should all just love each other. We’re in the EU, this is the 90s. And also because the answer is so simple – the best cut is ribeye, and possibly T-bone, but definitely ribeye. Rump is just shit.

Ribs
Nothing says “welcome to the OC, bitch” quite like barging in through the back gate at someone’s summer barbecue with a rack of ribs over your shoulder like a war casualty and chucking them onto the grill and watching them cook. You snatch a beer from a table, you grunt and nod at people and say “food”. You’ve never looked so sexy. You might want to massage a bit of rub into the rack while staring someone dead in the eye, you could poke and prod the ribs with some outlandishly large tongs while licking your lips.

Kebabs
Kebabs are not the sweating elephant legs you see winking at you after a night on the sauce, I’m talking the dainty kebabs that you spent an hour skewering like it was a primary school project. You do a bit of onion, a square slice of pepper, some meat, a hilariously small tomato. And repeat until bored. Oh look you made a thousand.

Pork chops
To be 100 per cent honest with you there are loads of other meats that benefit from a naked flame or white hot coals beneath them. Those fun little lamb cutlets, bacon is probably okay, you can do all kinds of sea creatures, some people barbecue fruit to make it hot and smooshy. But for whatever reason I thought I’d say pork chops and that’s what I did. So let’s just go with that.