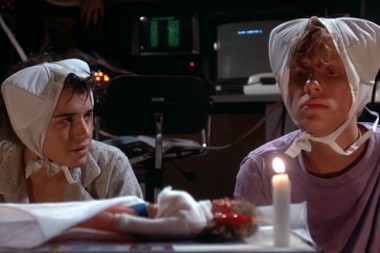 30 years ago John Hughes was like a one-man angsty conveyor belt fuelled by Echo and the Bunnymen songs just churning out great movie after great movie, and in the intervening years no one has come as close to voicing teenagers in such a realistic and empathetic way – he didn’t dumb them down or hang them out to dry, their problems and anxieties were taken seriously, which is a rare thing. It’s bloody hard being a teenager. His other strength was making adults look like dicks. Anyway, having been stooped at the foot of his altar for years, I thought I’d assemble the best John Hughes movies in order of greatest to tenth greatest…

The Breakfast Club (1985) – Writer, Director
Essentially a one-set play, it’s a wonder no one has taken it to the stage (million dollar idea for a good time – take this to the stage). Hughes takes a 1980s high school petri dish with the most typical specimens (dork, bitch, jerk, tough guy, freak) and puts them all into the same room for a few hours of Saturday detention, where they all unravel emotionally, smoke some dope, dance, and eventually start snogging. Molly Ringwald also gives Ally Sheedy the very worst makeover ever committed to film – not that Emilio Estevez minds that much – and when Judd Nelson punches the sky at the end, I always like to stand up and shout “YES! YES! PUNCH THE SKY JUDD!”. They’ve stuck it to the man.

Weird Science (1985) – Writer, Director
On the surface, this is a simple story of two harmless nerds trying to get some willy action with girls, all wrapped up in a modern reinterpretation of Frankenstein. But scratch beneath the surface and there’s a much deeper message here, it’s about the crippling emptiness of abundance and the pointlessness of superficiality. It’s wondering whether we’re all just lonely specks in an endless universe, and somewhere out there floats the gigantic coiffured John Hughes, pin in hand, determined to be the one to pop the American Dream. Or, if you don’t want to be quite so pretentious about it, it’s about how sometimes dorks go against the natural order and get hot girlfriends.

Planes, Trains and Automobiles (1987) – Writer, Director
The enfant terrible (translation: dreadful child) of high school cinema took a break from excavating the cravings of the teenage heart to write one of the best road trip movies ever. Steve Martin and John Candy give the performances of their lives, and in between the laughs – like when Candy rests his hand between Martin’s bum cheeks (those aren’t pillows!) – there are poignant moments of very genuine pathos. That’s right, pathos. I wrote the word pathos. And check this out – I don’t know what it means either.

Ferris Bueller’s Day Off (1986) – Writer, Director
On the one hand, a genius, on the other, a psychopath. To go to those lengths to get a day off school suggests that Ferris Bueller might have been overestimating the amount of genuine concern his busy working parents took in his wellbeing. You might argue that his levels of self-obsession were almost otherworldly (although nowadays they’d be pretty much standard). Of course, back in my day all you needed was a forced cough, a croaky “but I really want to go in” and some pantomime fainting and you’d get a  whole day in bed going to town on yourself while everyone else was in maths. Great film.

Pretty In Pink (1986) – Writer
Literally 30 years old in the spring, the themes of Pretty in Pink are timeless, in that they are of no specific era, but are absolutely universal. Class, sexiness, unrequited love, guys called Steff who have enormous fluffy hair. To sum it up, Andie is a girl with homemade clothes who wants to get real sexy with Blane, a hamster-cheeked rich kid whose chinos start pulsating at the thought of poor chicks showing him their pubes. Thing is, Duckie – hetero bff – wants a slice of Andie action too, and there’s a bloody prom coming up. It’s basically every Shakespeare play ever written.

Some Kind of Wonderful (1987) – Writer
In terms of ratios contrasting Kudos Received with Kudos Deserved, Some Kind of Wonderful has it all wonky. No one mentions this one, but it’s a gem, like a reverse Pretty in Pink, where the hot redhead is Eric Stoltz and the gorgeous posh guy is Lea Thompson (Marty McFly’s mum from Back to the Future). Continuing the reverse mirror reflection is Mary Stuart Masterson as Duckie. Only in this case, everyone gets the happy ending they wanted. By which I don’t mean that Stoltz gets an intense, eye contact heavy, hand shandy at the end of a back rub. This isn’t that kind of wonderful.

Sixteen Candles (1984) – Writer, Director
Before he became famous for standing in the rain in a black overcoat, John Cusack made his presence felt as “dorky teenager number two” in Sixteen Candles, another one starring Hughes’s number one muse Molly Ringwald. It deals with the nightmare scenario of your whole family forgetting your birthday because your sister is getting married the next day. I mean, how are you supposed to ever bounce back from that? Watch and learn, this is like an instruction manual.

European Vacation (1985) – Writer
All of the Vacation films were great, the first one with Wally World, the Christmas one with the lights, the one in Vegas that I can’t remember. But for its timing in my life – I would have seen it when I was about ten or eleven – European Vacation is the real humdinger. Full of sweeping cultural stereotypes, hilarious miscommunications, and at least ten totally unnecessary boob shots – which were very much the stock in trade of great 1980s comedies – it’s very LOL (laugh out loudy). Also those pointless tits were a priceless commodity for a young lad searching for the meaning of life.

Uncle Buck (1989) – Writer, Director
The message of this movie was simple: don’t be so quick to judge your strange uncle. Or it could be: if you’re a parent, entrust the safety of your children to the biggest loose canon you know. Or it could be: don’t judge a book by its cover. Or it could be something as simple and blindingly obvious as: fat men are funny. Whatever the message, this features some wonderful work from Candy, but even he might be out-funnied by the young lad Culkin, more of whom in about one paragraph’s time.

Home Alone (1990) – Writer
Before his bones contorted and matured and he morphed into a strange Boris Karloff figure existing only in the shadows, Macaulay Culkin was cute as a button. He enjoyed a terrific run of movies in the first half of the 1990s, and this was him at his absolute zenith, this was his Taxi Driver. He plays a cheeky monkey who is left behind by his family as they go to Paris for Christmas. He’s home alone (like in the title) and he’s battling clumsy burglars. The most disturbing element of the film is the sheer amount of time it takes for his family to realise they’ve forgotten him. It’s like he’s literally nothing to them. They then do it again in Home Alone 2: Lost In New York, and Home Alone 3: Take The Hint.