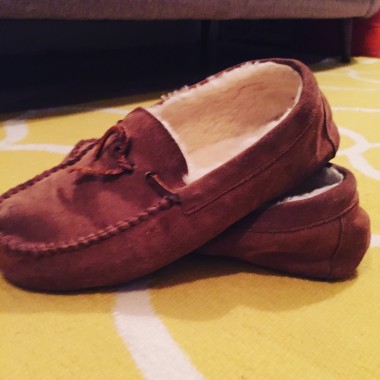 Only a month into the New Year, and I’ve really hit the ground running, I’m soaking up new information like an enormous guy-shaped sponge, it’s a great time to be alive. Already I’ve spoken at embarrassing length about the Ultimate Big Mac, and since then I’ve discovered something else – loungewear. In a big way.

But what is loungewear? I’ll tell you what it isn’t. It’s not Hugh Hefner lurking in hallways just wearing an expensive velvet dressing gown and a condom made of silk. There’s not a lounge in the world that would sanction that kind of malarkey. I’m talking slippers, tracksuit botties made of toweling that you can just plunge your hand into and fondle your actual balls/pubes whenever you like. I’m talking giganto-socks and old t-shirts.

Perpetually dressing down has been a revelation for me, I’m actually convinced that I’d be much more productive in office-based situations if I could wander around with sheepskin slippers on, not really giving a shit. And when I say “more productive” I probably mean “less productive”, I’m not sure, I haven’t thought this through. I might float the idea at my next town hall meeting if I can be bothered to go. I haven’t taken the plunge yet, but I’m considering a new baseball cap for when I take my loungewear to the streets to wander really generally in the direction of a newsagents.

Welcome to 2016, everyone. Let’s all grab a beanbag and eat swiss rolls using our hands.