The Interestment 2015 Review of The Year 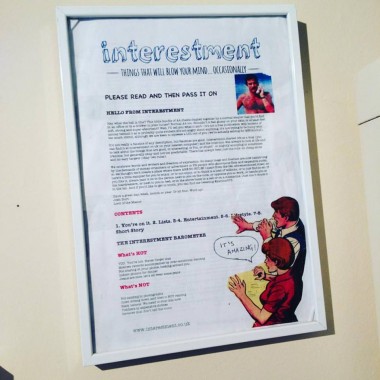 Talking generally it’s not been a great year for the planet. Politically it’s a bloody mess, there appears to be a holy war going on and not only do those never seem to end well, they never seem to end. We’re not at a good point in history at all. To compound it all, Justin Bieber – the world’s worst person – appears to have achieved some kind of ironic hipster endorsement, making him an approximation of the male Taylor Swift. It’s nuts.

Thankfully, when it comes to anything even remotely topical, Interestment tends to stay blissfully agnostic, existing in parallel with the world, but never really participating in it. We like to focus on the good stuff, to celebrate our differences and to feel warmth to most people and things. It just makes you so much less socially awkward if you’ve generally been nice.

Anyway, while bombs exploded, the needy got more needy and the world drifted further into a sea of ridiculousness, over at Interestment, great things were happening in 2015.

There have been thrilling pieces from old and new writers. Rory McClenaghan supplied amazing guides to some of the planet’s most alluring holiday destinations. Matt Comras provided a think piece about think pieces, which is like smoking a joint then putting a mirror in front of a mirror and blowing your own mind. Oral Eek made truly insightful and excellent observations alongside tasty recipe ideas.

The Studio Exec orchestrated actual jumbo LOLZ (laugh out louds) punctuated with moments of much-needed clarity and poignancy when it mattered. There have been great short stories by Craig Ainsley, and marvelous first-time pieces about 1970s fashion from Louise Stapley, and female empowerment from Charlotte Miller.

It’s been list-tastic, as is the way of these things nowadays. The Greatest Seinfeld Episodes (in order), Stevie Wonder albums (in order), Michael Jackson songs (in order), Hip Hop albums (in order), Mad Men Characters (in order). The best ways to consume… potatoes, chickens, eggs. It’s all there. A bucket list of 40 Things to Do Before You’re 40. Or 69 Dating Tips, or 71 Tips to Ensure you Ace a Job Interview.

There have also been non-lists, as we doffed a cap to the 1990s, or wondered if hipsters actually exist (which, in some ways, they don’t). There was an awkward moment when Twitter turned nasty, there’s been talk of religion and belief, and a handful of podcasts, featuring wonderfully groovy records.

Two other genuinely great things happened in 2015 – a baby was born, and blogged about each month. The final installment of this first-year odyssey will be published in mid-January, before the child-star embarks on the rest of his life unbothered by monthly updates. And 2015 was also the year that Interestment went into PRINT for one copy only. If you were heading down to Brixton tube in mid-March you may have witnessed a wild bearded man barking about this exciting turn of events before disappearing forever. Whether there will ever be an Issue #2, no one is entirely sure.

So there you go, don’t believe everything you read in the papers, 2015 has been joyful and triumphant! Have a great Crimbo and New Year, thanks for reading, feel free to spread the word, and we will be back and firing on all cylinders in 2016.

Word up, pizza be with you.