Including something by this gal… 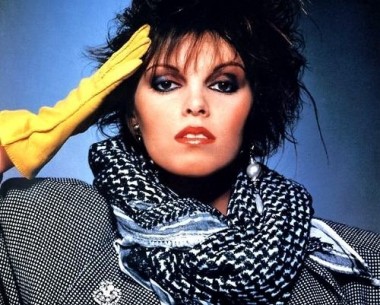 Don’t misinterpret this list, it’s not the BEST songs from the 1980s, these are just the songs that somehow encapsulate literally everything about the 1980s as I remember them. The kilts, the feathery hair, the different shades of denim, the heroin, the poptarts, cans of Quatro and cartons of Um Bongo littering the streets because bin men hadn’t been invented yet, people walking robot dogs, commuters using joysticks instead of steering wheels in their miniature cars.  Marvel comics, Nerds, bubblegum and Garbage Pail Kids, wrestling on TV, tea made from soda streams, men in suits doing aerobics on the pavement, people frying eggs on it next to them, guys with massive bulges in their jeans, women with enormous hips. I’m feeling particularly nostalgic for the 80s at the moment because my digital radio is stuck on Absolute 80s. Here are the songs that all contain the 1980s in a nutshell…

Pat Benetar – Love Is A Battlefield – one of the great songs of the era, the video tells a typical story of the time: girl has row with parents about homework, goes on the game.

Cyndi Lauper – Time After Time – now the soundtrack to a million interpretive dances, this started life as a moving ode to really fancying someone, before Tinder came along with loads more options.

Simple Minds – Don’t You (Forget About Me) – these days we wear our suits cut to fit, but there was a time in the 1980s when Jumbo XXL was the coolest size.

Spandau Ballet – To Cut A Long Story Short – this would come on Top of The Pops and a million grandads would burst into lounges shouting “IT’S NOT RIGHT!”.

Orange Juice – Rip It Up – my first music buying experience found me picking up this and Ebony and Ivory by Paul McCartney and Stevie Wonder for three bob and six from the local butchers.

Sade – Smooth Operator – the saxophone in this song was used to alert people to dim the lights, pour a gigantic glass of white wine and pop the old mirrored shades on.

Talk Talk – Life’s What You Make It – there were four key music buying demographics in the 1980s: gays, bisexuals, trisexuals, whysexuals, and dads. Sorry, five demographics.

Madonna – Lucky Star – now a very old lady living in the mountains, no one has seen nor heard a peep from Madonna for decades. She’s ripe for one of those “where are they now?” pieces.

Terence Trent D’Arby – If You Let Me Stay – The most underrated star of all time, he was like if James Brown went to Bob Marley’s hairdresser and Lady Diana’s tailor.

John Farnham – You’re The Voice – nothing says “I’m in the 1980s and I’M LOVING IT!” like standing with your legs as far apart as possible doing claps above your head to this anthem.

The Power Station – Some Like It Hot – unquestionably the most 1980s track of the whole 1980s.