Including this great stuff… 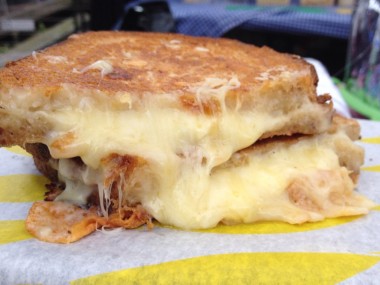 Newsflash guys, 2012 called and it says that London is now BRIMMING with street food, absolutely brimming. Brimming in a way that it has never brimmed before. It started vaguely brimming a few years ago but now it is completely brimming and you can barely move for small Russian women flogging pavlovas or guys called Hugo recreating jambalayas they had in the Bayou. We’ve come a long way from going to Benjis to get a cheese and coleslaw baguette for 7p every damn day for the rest of your life, so with that in mind I thought I’d talk you through my favourite street food experiences, most of which happened after 2012 which was the year it all started brimming big time…

A Katsu Curry from Soya on Leather Lane – my general rule is that when I find street food I enjoy I will eat it practically every day until I hate it and want to kill it. That hasn’t happened with this yet, the chicken is crunchy on the outside and definitely dead on the inside and the Katsu curry sauce is steeped with katsu flavour from the famous Thai Katsu Plant – you also get hundreds of tiny bits of rice for a microscopic fraction of a penny each.

Cheese Toastie from Grill My Cheese also on Leather Lane – the upside of this urban food shack is that the cheese toastie is extremely tasty and they grill it under an old vintage iron that you might see in a museum. The slight downside is that you have to say the words “hello can I have a BABY GOT MAC please?” out loud in front of other people. But it’s a small price to pay.

Rib Sandwich from The Rib Man who used to be on Eat Street – if you want to fit in at a party, as in REALLY fit in (like you’re supposed to be there), just tell everyone that you’ve eaten a rib sandwich from The Rib Man even if you haven’t – it’s a great way of making friends with guys who roll their trousers up to above their ankles or girls who dress like World War II hasn’t quite finished yet.

Duck BUN from a place that does a Confit Duck Sandwich somewhere in Farringdon – now that every road and every place and every person insists on having their own individual title or moniker, it’s almost impossible to remember what things are called half the time. So you’re going to have to bear with me on this one because the details are sparse. It was a van, or a stall, there were people, and I had a duck sandwich. It melted in my mouth and gave my stomach a boner.

Beefburger from The Burger Van on Loftus Road – pre-9/11 I lived across the road from QPR’s famous football ground and every Saturday morning a burger van would park outside my front door to flog cheap food made of beef foreskins and nutsacks to football hooligans. I’d dash outside like it was the first day of spring, then scurry to my quarters to hide one in my mouth. Then I’d chew it. Then eventually it’d end up in my guts.

Banh Mi from LOADS of places – there was a time when I was consuming so many Banh Mi’s that The International Vietnamese Baguette Council was going to BAN ME from eating them! Seriously though, these are generally great.

Weird Heart Burger from Tongue n’ Cheek at Kerb – nothing says “street food might be getting carried away” quite like queuing for 45 minutes for a burger made from cow hearts.

Jerk Chicken with Rice and Peas from Mama Jerk’s Crazy Jerk Table (not a real place) – I’m yet to master the art of asking for “rice and peas” without sounding like the whitest man who has ever walked the earth, but that buttoned-up awkwardness is all worth it when I tuck into a polystyrene carton of jerk chicken. I offer Mama Jerk a clumsy fist bump. The world momentarily stops.

Halloumi Wraps and Burritos and other things from EVERYWHERE – the great thing about these sprawling markets selling everything for £6 is that you can have something new and tasty every single day. I have enjoyed many burritos (pronounced “byur-reed-ohs”) and I find halloumi absolutely hilarious – so squeaky!