Behold, the 1990s encapsulated in one image! 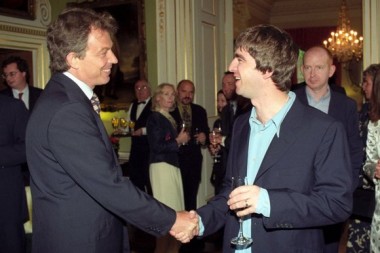 I watched the TFI Friday reunion show the other night and I grinned like a Cheshire Cat throughout, I loved it. Loved it ALL with the notable exception of the last half hour when they started talking about cars. But until then it was an accurate recreation of what had gone before and it reminded me how much I missed it, it was a great show. In fact it reminded me how much I missed everything about the 1990s in general, despite having spent the majority of the 1990s convinced that the 1990s were absolutely awful and totally devoid of any cultural relevance. It really got me to thinking, to staring deep into my own soul, I may have been wrong the whole time.

My hunch is that every generation thinks they’ve got it bad, they’ve culturally missed the boat on something spectacular and have been left with an empty shell, one to be filled with a series of bad decisions like small moustaches or quarter pounders without cheese or mirrored aviator shades or neck tattoos saying the names of your children. I was a baby of the 70s, a child of the 80s and a teenager of the 90s, through my mind’s eye when I was growing up a toddler every single person in Britain – female or male – for some reason seemed to look like an approximation of Claire Balding, and occasionally you’d be wandering down the street and you’d see people actually sniffing glue in public as if to remind you that all of the luminous neon colour applied to the 1980s was mainly to gloss over how awful life had become.

I began the 1990s with my mum taking me to a hairdressers and asking them to make me look like Jason Donovan which they absolutely did not manage to achieve. A couple of years later literally half of the planet started having their hair done like Liam Gallagher. His wasn’t the only haircut though, you had the option of getting a massive wedge taken out of the back instead so it looked like you were wearing a toupee or trying to look like a mushroom, others had an undercut and looked like they might be selling little bags of speed from their puffa jacket pockets. By the mid 90s I’d taken to shaving my own hair into a do-it-yourself crew cut, and I’d raised a defiant finger to the stupid 1990s because it felt like a nondescript decade that time had already forgotten even while it was happening.

At the time I thought all of the music was naff – I was too young to enjoy free raves, I didn’t like The Pixies and I couldn’t stand Britpop. I now know that some spectacular things were taking place, that sonic landscapes were being broadened, but at the time the only genre that appealed to me came from the late-1980s Rare Groove scene that I only knew about because of MasterCuts compilations. Back then there was no way of being in the right place at the right time unless you just so happened to know all of the right places and the right people (which I definitely didn’t), there wasn’t an internet to school you on the coolest, most current trends and to make you bulletproof from total and utter whackness, but that wasn’t necessarily a bad thing. In fact a great bonus of growing up in the 1990s was that you were free from cyberspace and forced to make your own judgement calls. Hence there WAS a soul and funk scene in my orbit because we had to invent it ourselves and it consisted of me and about one/two other guys who thought James Brown was king, or that Marvin Gaye was somehow a great undiscovered soul star, or that Donald Byrd and Roy Ayers were the true geniuses of our time – we’d sit around in bedrooms nodding our heads, our knowledge limited but constantly expanding when we came across records with familiar names on them. We learned to find out what was good by basically listening to as much as we could, then forming an organic opinion based on that.

Entire afternoons were spent in record shops looking for inspiration. In a similar sense, fashion was found out on your own too. Great friend of the site and Interestment Family Member Hip Hop Sam could be found roaming the streets in Arctic camouflage, people wore jumpers that draped wimpishly over their hands, there were lots of people in baggy trousers and hooded tops (before hoodies became scary), Travel Fox trainers, an ocean of tight Fred Perry polo shirts, we knew a bit about what we liked, but there weren’t consumer magazines in the way there are now and fashion certainly wasn’t aimed at young guys like me in their late teens or early 20s who had fuck all money to spend on clothes. There was no pressure to look a certain way, no mad dash for Top Shop to keep up. Like most of my records, the clothes I bought were second hand, mainly from charity shops because once I’d forked out on fags and weak lager that’s as far as I could stretch. My mum might occasionally treat me to some jeans from The Gap or a lovely gentleman’s sweater from M&S, I blew part of my student loan on an expensive anorak, but mainly I used to buy short-sleeved shirts and wear them over ridiculous suit trousers, I’d partner this with a navy Kappa top or with my granddad’s sheepskin coat because I thought it somehow made me look like Matt Dillon from Drugstore Cowboy. It was a freeing time, there wasn’t the cult of the individual in the way it exists today, not the same mass self-obsession we thrive on, so ironically you were able to express yourself without being remotely self-conscious. To put this in perspective, I once twisted all of my hair into spikes and went out in public. No one cared.

1990s cinema was spectacularly good. My memory’s foggy but I think you could still smoke down the left hand side, and though the 1970s had seemed much grander and artier with Apocalypse Now or Taxi Driver and the 1980s much more bubblegum with Eddie Murphy comedies and John Hughes films, now there was a perfect middle-ground with Point Break and True Romance, Pulp Fiction, Dazed and Confused, Boogie Nights, Scream. All wicked films. TV was amazing too. Richard and Judy became a student staple, early reality shows like The Living Soap or The Real World on MTV put together intriguing casts of normals and misfits, golden era Eastenders followed Top of The Pops on a Thursday, the holy Saturday night trinity of Baywatch, Gladiators, Blind Date. You bookended your week with The Big Breakfast and The Word, shows which you could take now and prod in a petri dish and they’d tell you everything you need to know about the culture of the 90s, it was a kind of anti-culture culture, a shattering of convention and professionalism that was echoed in magazines for men who weren’t heroic. Even football was different, more characterful, knockabout and optimistic, caught in the sweet spot between the shame-faced hooliganism of the 70s and 80s and the modern sense of entitlement that footballers and their fans have now, so for a minute it was unifying and FUN. Euro 96 was the best tournament of my lifetime by a long long way.

In short, the 1990s were a great time to be alive, British culture was like a Carry On film come to life but with less creepy old men (marginally). Free university education, pound-a-pint nights which were perfect for getting off with people or barfing down the side of buildings (or preferably both). I have no idea how I met new people or made arrangements with them because we had no phones, no emails, no internet dating. Yet we got together in pubs, we went to parties, we rode bikes and had kickabouts and occasionally wandered around Kwik Save buying chicken burgers, we ate pizza, we managed to stay a part of each others lives despite all of the obstacles in our way. I even used to receive long letters from friends of mine telling me how they’d been and asking how I was. I’d send them a letter back. This was guys (and sometimes girls) writing to each other! It was a decade when you had to invest real time into people, and real time into the things you liked – you couldn’t download treats on a whim, you had to brave outdoors, you couldn’t buy your image wholesale, everything about everyone was cultivated, at least in some small way.

So with that I’d actually like to apologise to the 1990s for being so down on them at the time. To look at them now, in the way that the mists of time have transformed the 1980s from being tacky and oafish into a creative cultural high point for society, so the 1990s are getting the rose tinted treatment and quite right too. They were pretty ace.

And notice I never once said zig-a-zig-ah! Or New Labour.

It was close though.